« Stoutland: O-Line depth has ways to go | Main | End of the year wrap-up with Frank Haith »

CORAL GABLES -- One of the best things about this spring has been the amount of access coach Randy Shannon has given us -- the media. Each day I've been out there, I've had a chance to catch up with a group I like to refer to as the U's Veteran Watch Committee, a group of about four or five older gentlemen who have probably seen just about every Canes' football practice for the last gazillion years.

I don't want to shed any light on their identities because it might endanger their safety. But take my word for it, there might not be better sources when it comes to the development and comparison of Canes players beyond the coaching staff than these guys. After all, they've been there just about every day for every practice. How special are they? Coach Randy Shannon usually walks off the field with them, sharing laughs and whatever thoughts might cross their minds.

I have to admit, I've thoroughly enjoyed my time with UVWC this spring. Not only are they die-hard green and orange bleeders who wear their colors proudly to every practice, but they're realistic too. They don't jump on the bandwagon with one-hit wonders. To impress the UVWC you not only have to show it every day in practice, but you got to do it when there are zebras on the field.

With that in mind and with the spring game on tap this Saturday at Fort Lauderdale's Lockhart Stadium, I went to the UVWC earlier this week to gauge their thoughts on The Top 5 newcomers/new position guys who have really stood out this spring and created real buzz and hope about their future. We shared notes (NOTE: When you talk with the UVWC, you don't refer to players by name. You refer to their jersey numbers) and these are the players the UVWC feels most excited about. This should certainly help you if you will be attending the team's final scrimmage on Saturday.

1. (No. 22) Mike James, running back: He's not only become the media's favorite, but left tackle Jason Fox's as well. Mr. Fox provided the most glowing quotes about James to date this spring after Wednesday's practice. 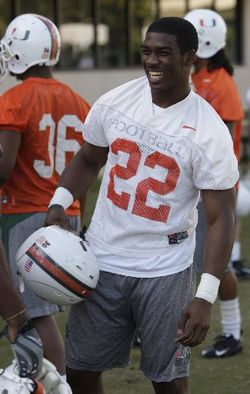 "I honestly think he’s a really special guy," Fox said. "He’s probably my favorite incoming freshman so far. What I like most about him is he’s a hard worker and he studies a lot. We were going through some stuff the other day and he was coaching the other guys out there in blitzes and protections. He’s a smart guy. Every time I see him before practice I see him in his playbook. Before practice today he was just looking through his playbook. He’s just a dedicated guy. When you can get a few guys like that, that’s what it takes to win.

"He’s a hard runner too. I’m not going to compare him to Baby J and Coop. But he’ll make a tough run, bang out 10 yards or something and he’ll be the first one back in the huddle. He’s just an explosive guy, runs tough, runs with his pads low. It’s hard to believe he’s just a freshman. He’s a very coachable guy. Whenever you talk to him all he wants to do is get better. Whether its an older player or coach, he’s always there wanting to be coached and wanting to get better."

The UVWC agrees. Although they aren't ready to dub the 215-pound, 5-11-inch inch freshman (he's shorter than 5-11) the next great one, they say few Hurricanes backs have possessed his abilities to run between the tackles and power over guys the way he does. To be honest, James doesn't remind me of any Canes before him at all. He actually reminds me of a Gator who wore the same number (22) and did some amazing things with the Dallas Cowboys.

2. (No. 7) Vaughn Telemaque, safety: Truth be told, there probably isn't going to be a newcomer who makes a bigger impact than VT, who among the players in this group will likely be the only one who starts against Florida State on Sept. 7. Telemaque has natural ballhawk abilities which have drawn comparisons from coach Randy Shannon to former Canes great Ed Reed. The UVWC expects him to make an immediate impact because not only does VT not shy away from making big hits on running backs, but he's very good at getting a hand in to bat balls away from receivers at the last second. According to the UVWC, he's kind of a hybrid of Sean Taylor and Ed Reed.

3. (No. 86) Tommy Streeter, receiver: The UVWC loves Streeter's size (6-5, 200). But what they love even more are those long legs and speed (4.4), which he uses to jet past shorter corners and safeties with ease. What Streeter adds to an already loaded receiving corps is the ability to go deep and have a player who catch the ball at its highest point so often he makes it look easy. Like I told the UVWC, expect Streeter to become the great deep threat Lance Leggett never did.

4. (No. 83) Kendall Thompkins, receiver: Another receiver who was redshirted last year, but one who has certainly caught the eye of the UVWC. Thompkins, I've been told by his former offensive coaches at Miami Northwestern, was the clear-cut best route runner on his team (one that included Aldarius Johnson and Streeter). Earlier this week, cornerback Demarcus Van Dyke said the 5-11, 170-pound redshirt freshman is kind of like a Roscoe Parrish. The UVWC and I disagree. Think more of a Sinorice Moss.

5. (No. 35) Olivier Vernon, defensive end: There's probably a good chance Vernon doesn't play much this coming season because of the amount of depth at the position. But they like what they see in the 6-2, 250-pound true freshman in terms of work ethic and pass rushing ability. If Vernon stays healthy, I think he could end up becoming what Eric Moncur was supposed to be.