Telemaque itching to be next playmaker in secondary

Jacory Harris' pass was off target and tight end Daniel Adderley was not in position to yank the ball down. Neither was safety Vaughn Telemaque, but that didn't matter. 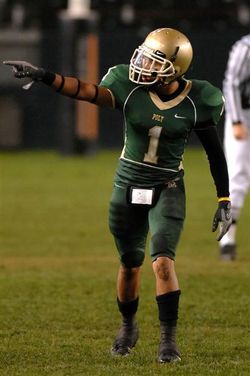 Still stumbling a bit from the bump he received from Adderley, Telemaque put his right hand out in an attempt to make a play on it. With the ball zipping away from him and toward the back of the end zone, the 6-1, 195-pound redshirt freshman  got just enough leather to bat it back towards his upper body. It turned out to be the only interception and blemish of Harris' near-perfect day Saturday during the first scrimmage of the spring. In the longrun, it was  a meaningless interception in a meaningless practice game. But it might have been just the first play, the first sign Telemaque is just as good as advertised.

You might not remember this, but after the Emerald Bowl Randy Shannon gave Telemaque possibly the highest praise he's given any player since taking over the team in 2007. Not only did Shannon say the loss of the 6-1, 195-pounder last fall hurt his team badly, he compared Telemaque to one of the best Hurricanes' safety ever -- Ed Reed. It wasn't what you expected to hear from Shannon who rarely makes comparisons of that magnitude, much less about a freshman who played in three games before a shoulder injury sidelined him for good. Saturday, though, we saw the first real reason why Shannon can't seem to hide his true feelings of excitment for the kid from Long Beach Poly.

"It's a pretty big compliment," said Telemaque, who said he hadn't heard that Shannon had compared to Reed. "It's nice to hear that. But I just want to keep on working, going as hard as I can. I want to play to the best of my abilities."

Despite seeing the majority of snaps with the first team already this spring, Telemaque still has a long way to go in his development. Defensive backs coach Wesley McGriff and veteran cornerback Chavez Grant both say Telemaque has big play potential, but needs to be a little more committed to his playbook. "He's not quite what Jojo Nicholas is right now. Jo is more of a bookworm than Vaughn," McGriff said. "But Vaughn is one of those guys whose smart without the film study. We're just always on him to come watch more film."

Said Grant: "If he gets his mind right, he'll be special. Sometimes we tell Vaughn 'Your lazy.' He's kind of got this little attitude about him. We got nothing against him, it's just to make him better. He's going to be great. He’s a ballhawk, he can come up and hit. Once he learns the defense, has it down, he can be special."

Miami's secondary was anything but special last season. The Canes tied a school low for interceptions with four. As a senior at Poly, Telemaque had nine interceptions of his own, including three in the state championship game. McGriff said Telemaque brings the kind of attitude he wants his corners and safeties to have -- a big play mindset.

"I think this year with the guys being older, getting Vaughn back in the mix and just having the opportunity to train them an additional spring and fall, we should be in position to get more turnovers," said McGriff, whose secondary produced only two of those picks -- one by freshman Brandon Harris and the other from the NFL-bound Bruce Johnson.

"Turnovers are like a disease. Once you get one, it's contagious. I think in order for us to get an abundant number of turnovers and interceptions we got to start early in the season so guys become risk takers. They need to take that step out on the edge and stop playing cautious and go get those tunrovers. I would say our guys were being too cautious last year. I think our guys tried to be too sure. There a lot of times I told them, stop trying to be exact, stop trying to be perfect and go play football. I think last year they just were trying to learn the scheme and be sure. In this game, just like life, you can't be too sure about anything. You just have to go out and play it, win those one-on-one battles."

ESPN senior writer Bruce Feldman believes Telemaque will make those big plays and soon. He named Telemaque as one of the Top 10 newcomers in college football this spring. Telemaque said being a gambler on the field is something that just has always come natural to him.

"I like to make big plays, that's the kind of safety I am," he said. "I need to get some interceptions and big turnovers. If I don't, I feel like I'm not helping the team. I know we only had four [interceptions] last year. But we’re going to change that real soon. We've got a lot of athletes ready to play and make big plays along with me."

The fact Telemaque is even at UM is a bit stunning considering where he's from. California and USC usually scoop up all the big talents at Poly, a perrenial power that has produced talents such as baseball stars Tony Gwynn and Chase Utley to football stars like Willie McGinest and Desean Jackson. Telemaque said while USC wanted him badly, it was always a life long dream to play for the Canes, a team he grew up admiring from a far and noticed for the first time when UM won the national title at the Rose Bowl back in 2001.

Little by little, he says, he began falling in love with Miami's style and swagger more and more. That could explain part of the reason why he showed up to his recruiting announcement on local cable television sporting a Sonny Crockett-like white blazer and sunglasses.

"Overall, I’m just enjoying the life in Miami," said Telemaque, who said he still keeps a part of Cali with him when he skates around UM's campus on his longboard. "I like the swagger out here because it's a lot like out there, just a little different. The ocean water is warmer. The beach here doesn't have basketball courts like out on Venice Beach. But I still love it out here."

Fans would love it if Telemaque can bring the big play back to Miami's secondary. At least through one spring scrimmage, he already has. "Fans can expect big plays and excitement," Telemaque said. "I want to bring that back to The U. I want to bring it back in a fashionable way, in a team way. I just want to make people proud that we’re The U by going to play hard, make plays and win everytime I'm out there."