A chat with Kirby Hocutt & more

Two weeks ago when the University of Miami was on the road in the NIT at Providence, I got a chance to catchup with athletic director Kirby Hocutt and pick his mind on a few hot button issues. I figured the highlights of our discussion might be the best way for me to start sharing a boatload of notes I've collected in the past week since the end of the spring football. 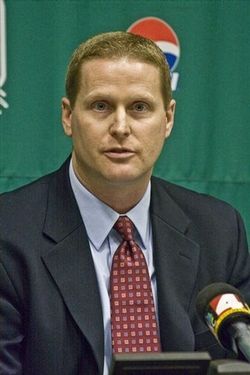 > UM football coach Randy Shannon has two years left on his current contract. Entering his third season after going a combined 12-13, Hocutt said he has yet to broach the subject of a contract extension with Shannon and didn't share a timetable either when negotiations might begin. But he didn't sound like an athletic director whose begun looking yet for Plan B either.

"We haven't talked yet," Hocutt said. "But that's no indication of our support for Randy. He's done an excellent job. There's an excitement around the program as well as optimism for next year. Miami football is on the right track. Randy has a plan and we're going to continue to support him and he's going to be the leader of the program for a long time. I'm confident of that."

> One thing that Shannon did that pleased Hocutt was the way he handled the recruitment of running back Bryce Brown, who went from longtime UM commitment to signing with Tennessee two weeks ago after Shannon decided not to renew his scholarship offer.

"He made the right decision in my opinion and I respect him for handling it the way he did. We're going to be fine moving forward," Hocutt said. "[Recruiting] has changed. Is it concerning? Yes it is. You would hope you can work directly with the parents and the young people involved. You hope the third party influence is not as involved as it is today, especially in the sport of basketball. This honestly was the first time I saw a third party involved in a football situation to the degree it was. And it's something I think we need to start talking about at the conference level and maybe moreso on a national level."

> One of the things Hocutt said he has become more involved in since taking over has been the future scheduling of opponents. He wants to get UM involved in big-time games including playing Notre Dame again and getting Florida on the schedule. Right now, Kansas State is looking to get off UM's schedule for 2011 and 2012. Hocutt said he and Shannon have agreed that as long as UM finds a comparable opponent for the series they would let the Wildcats out of their agreement. According to Hocutt, ESPN is trying to find a replacement to create a marquee TV matchup. Hocutt would not mention any names, but said it would be another Big 12 opponent. I've heard rumblings the possible home and home series could come against either Texas, Texas Tech or Missouri.

"We're going to make sure the opponent makes sense for Miami and what we're trying to accomplish," Hocutt said. "We'll see what opportunities present themselves and move down the road."

Speaking of down the road and opportunities, Hocutt seemed more confident there could be a future meeting with Miami and Notre Dame than with the Canes and Gators, who are currently scheduled to meet for the last time in football at Dolphins Stadium in 2013.

"If there is any way whatsoever to get [a series with Notre Dame] done, we'll get it done," Hocutt said. "I don't want to lead people on or sound too optimistic, but there has been an initial phone call and another conversation through a mutual relationship [TV]. There's definitely interest on both sides. If it's something we can get done in the future it sounds like we're both committed to it."

> When it comes to Frank Haith, consider Hocutt a huge fan of UM's 43-year old coach and a coach Hocutt would probably willing to fight for financially should Haith receive an offer to leave the program. Haith, who last week told reporters and his team he has no interest in leaving UM, has once again had his name resurface this week in filling a possible job opening. FOXSports.com reported Wednesday Georgia has Haith next on its list of candidates after Oklahoma's John Capel. Ten months ago, Hocutt and Dee extended Haith's contract at UM through 2014. Hocutt, who said he speaks to Haith on a weekly basis even during the offseason, said nobody has formally asked UM to speak with Haith.

"Frank and I spend a lot of time talking and its all focused around the future of Miami basketball, what we can continue to do to elevate this program," Hocutt said. "We have a great relationship. He knows we don't want anybody in this country to be our head basketball coach except Frank Haith. You hope you are in position as an athletic director and athletic department thatr people are coming after your coaches, your staff members. That's what you want. That means you got the right person in place and you are doing good things. I think it's a complement to UM that Frank's name is mentioned out there so much."

This week I spent two days covering the McDonald's All-American festivities and got a chance to not only speak to a few big-time players, but pick the brains of high school basketball recruiting gurus on a variety of topics.

> UM's quest to land John Wall, the nation's No. 1 available point guard, should probably be considered what has been for a long time -- shaky at best. With John Calipari leaving Memphis for Kentucky this week, many gurus believe it won't necessarily stop Wall from following him. As I was told by SI's Andy Staples last night, Kentucky is probably the most ideal situation because they are desparate for a point guard. Wall has told several publications he plans to take an official visit to UM on April 24. But like Dwayne Collins told me last night when I bumped into him in the BankUnited Center parking lot at around midnight, "if I was him or anybody else living up in that cold, I'd want to take a trip to Miami, too. But that don't mean he's coming here."

> Speaking of Dwayne Collins, although there have been reports that the 6-8, 240-pound forward is considering leaving UM after this season to enter the NBA Draft, I'd consider the likelyhood of Collins leaving about the same as Wall coming to Miami. "Really, I'm just waiting on Coach Haith to tell me what he thinks," Collins said. "If he thinks I should go, I'll go. If he doesn't, I'll be back." NBADraftexpress.com ranks Collins 37th among the nation's Top Juniors. That's not close to being a first round pick.

> Jack McClinton's NBA Draft stock, meanwhile, remains up in the air -- especially after a knee injury slowed him toward the end of the year. McClinton will get a chance to make an impression on NBA Scouts again, however, when he participates in the Three-Point shootout of the State Farm College All-Star festivities Thursday night at 6:30 p.m. at the site of the Final Four in Detroit.

> Florida-bound and local guard Kenny Boynton Jr. had a pretty good night (10 points) in Wednesday night's McDonald's All-American Game at the BankUnited Center. I asked Boynton Tuesday if there ever really was a bone in his body that considered playing at Miami, in front of his friends and family.

"There definitely was," Boynton said. "They did recruit me. Coach Jorge Fernandez recruited me real well. Coach Haith recruited me also. But I didn’t think he put more into it like Duke and Florida. I think coach Haith didn’t show me he really wanted me. He came to see me a few times. But he never called a lot. I think it would have been a good situation [coming to Miami]. It’s close to home, Miami is on the rise. I think I could have helped. But it’s a good situation where I'm going too. I like Florida a lot."

> Coming off their second series loss in 23 series in the ACC, UM's baseball team will open a three-game homestand against Florida State this weekend at Alex Rodriguez Park at Mark Light Field. The biggest news, though, is UM has decided to move No. 2 starter David Gutierrez into the Friday night starter role in place of the struggling Chris Hernandez Gutierrez is 2-2 with a 1.51 ERA. Hernandez is 2-2 with a 5.88 ERA.

By the way, the Canes will honor the 1999 National Championship team before Saturday night's game at 7 p.m. Get there early if you want to catch it.