Florida State and Miami are rivals when it comes to every sport. But there may not be more real hate involved in any of them moreso than in baseball. At least that's what it seems like. 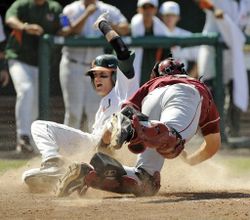 Thursday, with UM set to host the Seminoles in a three-game series at The Light, I caught up with several players and coaches to see exactly where the rivalry is at. After last year's heated battle in Tallahassee, which saw the Seminoles refuse to shake hands (and fans get ugly) after the Canes escaped with a series-clinching Sunday win, consider the rivalry on orange alert.

"It was definitely more of a fun rivalry for me when I played," said pitching coach J.D. Arteaga, who pitched for the Canes from 1994 to 1997. "I had players I knew on their side. Mickey Lopez and Doug Mientkewicz were my high school teammates. We went to dinner after it was over. I don't know if we have that anymore because we usually don't recruit the same kids. It's a little more different rivalry now after a few things that have happened over the past six, seven years. It's a little hotter to say the least."

Hot for even the two guys are supposed to be setting the example, Jim Morris and Mike Martin. Morris got his first coaching job under Martin. But each year their relationship has higher levels of stress, especially after Morris beat Martin to win the 1999 national championship.

"That's part of the reason why I don't like to schedule friends," Morris said. " People think it's a game - it's a game to people in the stands. But to me it's my life. To Mike Martin, it's his life. I think about it all the time. It's my life. It's not just a game."

Players agree, especially when it comes to this series. Shortstop Ryan Jackson said he got sprayed with Sunkist and middle fingers by FSU fans last year at the end of Sunday's wild finish. He says while players from both sides don't like each other, playing in atmosphere where you don't like your opponent jacks up players and makes the games even more excting.

"I'm not going to beat around the bush. We don't like them. They don't like us," Jackson said. "I'm sure they're saying the same thing up there. We're looking forward to playing good, clean baseball and hopefully come out on top." 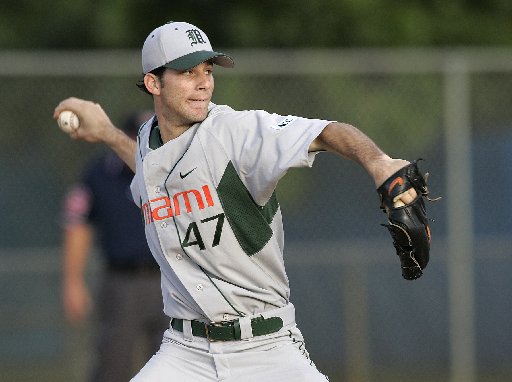 SOME HELP FROM BIG BRO: Earlier this week, David Gutierrez found out he would be making the move from No. 2 starter to Friday night ace. The redshirt junior right-hander didn't have to think twice about who would be the first person he'd call to share the news with -- his big brother, former Hurricanes closer Carlos Gutierrez.

Why big bro and not mom and dad? Because it was big bro that taught him that new pitch this summer past summer -- a hard sinker -- that has helped David put together a 2-2 record and the lowest ERA (1.51) in the ACC the first half of the season.

"We worked on it a lot this offseason while he was training down here," the younger Gutierrez said Thursday. "That's what's helped me take the next step. Last year, I didn't throw it all. Now, I use it on every batter at least once. It's an effective pitch because it looks like a fastball and dies. They'll roll over it and I get groundouts."

As for the elder Gutierrez, drafted in the first round by the Twins last June, David says his older brother expects to begin High-A ball in the coming days.

WHAT'S SLOWING DOWN CHRIS HERNANDEZ?: While Gutierrez has thrived for UM this season, last year's ACC Freshman of the Year and ace, left-hander Chris Hernandez has hit a hard sophomore slump. In six starts and 33 2/3 innings, Hernandez has given up 22 earned runs and walked 12 batters. He gave up 18 walks and 34 earned runs all of last year.

Arteaga said the difference is while Hernandez is throwing harder, he has less command. Morris said Hernandez is trying to be "too fine," and is losing two strike battles he won with opposing hitters last year.

"The first thing we talked to him about was not worrying about duplicating what he did last year. And that's exactly what he's trying to do. He's trying to be perfect," Arteaga said. "This game is to hard to be perfect. As soon as one bad thing happens, it kind of multiplies because you're waiting for the next [bad thing to happen]. Like I said, he's throwing the ball better. But it's nowhere near where he was last year. I didn't expect what he did last year to happen again. He's 2-2 right now. If he ends the year 11-3 with a 3, 4 ERA, it's still a great year."

OUT OF THE SLUMP?: Jackson began the season hitting third in Morris' lineup. But a first half slump ultimately has had him moving all over the place, from 1, 2, 3 to 7, 8, 9. Thursday, Morris said Jackson put too much pressure on himself to start the year and was hitting too many flyballs. But both Morris and Jackson see signs the .283 hitter could be on the verge of turning the corner.

"In my last 10 at bats, I think I've hit seven balls hard," Jackson said. "I feel like I'm getting back on track, staying positive.

"I came out of the shoot trying to do too much. I had a good spring and fall and sometimes when you do that you come out trying to do more than you can. My stride was a little too big. Sunday's game versus Georgia Tech was kind of the turning point for me in terms of how I felt my season was going to go. I hit some balls hard in every bat. I carried it over against Barry. I'm optimistic about the rest of the year. I know what I can do. That's why I got the second half."