Jimmy Graham hasn't played football since the ninth grade. But he's not letting it stop him from giving it another shot. 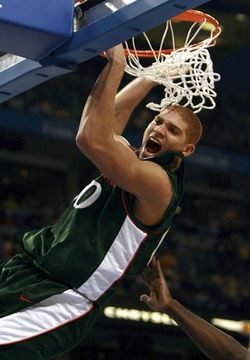 Around lunchtime Wednesday, University of Miami coach Randy Shannon confirmed the rumors we'd all been hearing for weeks when he told reporters during his 10-minute ACC teleconference that the 6-8, 260-pound Canes power forward will indeed be trying out at tight end.

"We will give him a chance if he wants to do that," Shannon said. "I told Jimmy he has an opportunity to come back to school, enjoy the dream of playing football. He's been around, been with the players, Jacory Harris some... with his size and speed he may help us."

The Hurricanes could definitely use the help. UM is not only thin on experience at tight end, they don't have any proven talent aside from Dedrick Epps. Seniors Richard Gordon and Tervaris Johnson and redshirt sophomore Daniel Adderley took the majority of the snaps the spring and looked average at best. Stephen Plein and Billy Sanders will likely not be ready to help as true freshmen.

Wednesday, Shannon provided some good news when he told reporters Epps, coming off knee surgery in December, was ahead of schedule. "He should be ready for camp, should be running full speed in July," Shannon said. "He should be full speed and ready to go."

But it's Graham who could be the most intriguing prospect at the position considering his size and athletic ability. Some of the NFL's best tight ends -- Antonio Gates, Tony Gonzalez -- have come from the basketball court. Graham, who is declining interviews according to UM sports information director Margaret Belch, could be the next one.

Wednesday, after Shannon's press conference, I caught up with Carlos Peralta, Graham's old basketball coach at Charis Prep in N.C. Peralta, who has talked to Graham at least once a week since he's been at UM, told me the football team approached Graham about giving tight end a try. Peralta said Graham wrestled with the decision for weeks, praying on it for days before finally telling Shannon recently he would give football a shot.

"First and foremost what swayed him was that he's enjoyed his time at UM," Peralta said. "And he saw this as an opportunity to extend his experience a little bit. He talked about going to graduate school, how he'll be able to be a double major [marketing and business] by the time he graduates. Jimmy always loved football. It was his first love really. The way he and I see this is he gets to let go of more unleashed aggression -- without the fouls."

According to Peralta, Graham explored all of his basketball opportunities before deciding to give football a try. He looked into potential agents and contemplated offers from overseas -- as far East as Russia.

"Options were available to him," Peralta said. "I think the bottomline is he felt like it was a bit of an unknown in terms of environment. Although the money looks good on paper, he didn't know if he'd enjoy living for six months in Russia. That's what it really came down to."

> Shannon discussed a few other topics during his teleconference including his new coordinators, UM's NFL First Round Draft Streak coming to an end and how Taylor Cook will enter the fall as the team's No. 2 quarterback (which we expected). Nothing was earth shattering. FYI, it's likely the last time we'll hear from Shannon until fall practice begins.

> While I realize many of you might have been miffed by my last blog on recruiting becoming a little more challenging locally for the Canes, I want you to know I had several interesting conversations with several UM staff members behind the scenes about it this week.

One person told me the reason it is getting harder is because of the emergence of more "mentors" locally. These people could be trying to earn "favors" with outside schools. I'm not going to point any fingers (just know I don't write blogs to stir up controversy or to get hits). I've had my finger on the pulse of recruiting here in South Florida for years. Something isn't right. With severe budget cuts happening on the high school level in Miami-Dade and Broward, assistants and people around programs are losing their jobs. Understand there might be a few desperate guys out there trying to find "help." They are beginning to point kids toward a particular school for that reason. UM knows it and they're trying to fight it. It's just not so easy when some schools have something to offer and The U does not want to get involved in that at all.