Lamar Miller hasn't had a conversation with a University of Miami coach since he attended the spring game last month. It's not because Miller is mad at the Canes, or the Canes are mad at Miller. They're still definitely in love. It's because Miller has eyes on something else -- winning the state title in the 100 meters. 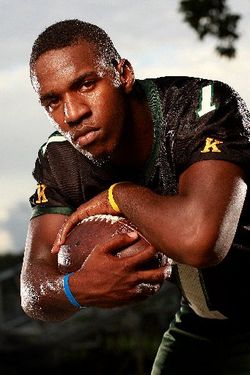 Thursday afternoon, I caught up with the Killian High running back at the District 16-4A track and field meet down at Southridge High School. He looked a little different from the last time I saw on National Signing Day when he wore a black suit and an orange and green Canes tie. This Miller was 10 pounds lighter, right around 208 he says, and wearing a pair of black track and field tights to go with a determined attitude. "I really want to win a state championship," he told me before the race. "I don't like losing at anything."

Miller proceeded to win his next race moments later by doing what he often does on the football field -- blowing past his competitors. At the horse track, he would have won by at least two lengths. It wasn't his best time (10.79 seconds), but it got him one step closer to where he wants to be in two weeks -- the FHSAA state track and field championships in Winter Park.

Miller finished 11th in the state last year and currently has the 25th fastest time (10.73) this season in the state according to flrunners.com. Normally, non-track officianados would think that's not that impressive. But when you look at who is in front of Miller this year (it's probably one of the fastest years in state history) and how his career best compares (10.56, which he ran as a junior) to other Hurricanes and football greats, you come to appreciate the great open field speed Miller possesses for someone who stands 6-feet and weighs close to 210 pounds.

Remember how in awe we were of the speed slender Canes receiver Travis Benjamin showed us this past season? His fastest 100-meter time at Glades Central was 10.72 seconds. Remember little, speedy Sinorce Moss and how he would blow past guys in the secondary? His career best in the 100 meters at Carol City was 10.96. Devin Hester -- the guy with the 100 speed rating in John Madden's video game -- his fastest at Riviera Beach Suncoast was 10.87 seconds. Miller (timed at 4.32 in the 40-yard dash as a junior) has not only run faster than those speedy Canes in the 100 meters, but Minnesota Vikings running back Adrian Peterson (10.61) too. The fastest any Hurricane has run in 100-yard dash? Little-used former cornerback Terrell Walden (10.65).

The point is there aren't many guys who have come to UM with that type of long-range speed. Even Sam Shields, who was timed at a UM record 4.2 seconds earlier this week in the 40-yard dash, turned in his fastest 100-meter time of 10.82 seconds at Sarasota Booker.

One glance over state record books shows you it's not easy for football players who take a beating in the fall to make the speedy transition to track in the spring. Many usually pass on it to give their legs a rest, while others have competed in the sport or used the training to make themselves faster. But the guys who win the big races are usually those who aren't getting slammed into by linebackers and 300-pound defensive lineman. Miller, obviously, isn't one of those. His focus was to lead Miami-Dade County in rushing and his team deep into the playoffs (which he did). But like the five guys I mentioned before, he has that extra special gear and the ability to pull away from the pack, which makes it exciting to think what he could do with the ball in his hands in the open field this fall.

For comparison, current Florida Gator Jeffrey Demps owns the state record with a 10.37 100-meter dash time. He nearly broke under 10 seconds at the U.S. Olympic Trials is by far the fastest high school football player the state has ever produced. Miller will likely be trying to beat a pair of future Gators when he gets past next week's regionals at Traz Powell Stadium. Among the speedy runners in front of him expected to make the final eight-man field -- receiver Andre Debose (10.63) from Sanford Seminole and 2010 cornerback Demar Dorsey (10.55) from Lauderdale Lakes Boyd Anderson. Another big name expected to participate in the race, future Michigan quarterback Denard Robinson (10.44) from Deerfield Beach. All will be trying to chase down one of the country's future Olympians in Dentarius Locke (10.35), who is headed to Tennessee on a track scholarship.

With freshman running back Mike James already in camp and making noise on the depth chart and veterans Graig Cooper and Javarris James back, there likely aren't going to be enough balls to go around in 2009 for Miller to get much of an opportunity to show what he can do in the backfield. But in the kicking game, he could prove to be extremely valuable. In his three varsity seasons at Killian, he returned nine kickoffs back for touchdowns. "Kick returns, I'm very comfortable with those," Miller said. "I've been doing that my whole career. Punt returns? I got to work on those. But I like getting the ball, seeing an opening and hitting it full speed."

Miller plans on doing just that when he gets to UM in the summer, which he says he should do because he's "already gone through the clearinghouse with an ACT score of 20" and because his GPA will get a boost from 2.57 to somewhere around 2.7 to 2.8 when he graduates at the end of May. "I got 2 A's, 3 B's and 1 C on my last report card," Miller said. "My GPA should move up even more on my next one."

But first, before prom and before he starts taking classes at UM shortly after, there's a state title to contend for on Saturday May 9th. "I feel very confident I'm going to win," Miller said. "I have great competition. I know that. But that just drives me even more. I'm working hard on dropping that time, getting aster. I'm going to do it. You'll see."