« Lamar Miller is scary fast | Main | Can the Canes get back to Omaha? »

The Miami Hurricanes took their best shot at the nation's No. 1 available basketball recruit this weekend. So, did staying on South Beach and hanging out with Jack McClinton this weekend convince future NBA Lottery star point guard John Wall that UM could be the place he spends one year before collecting a multi-million million dollar paycheck at the next level? 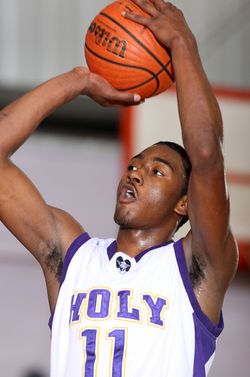 Let's just say the Hurricanes might now really be in the mix. After reading several interviews Wall gave various media outlets in the time since his visit, it appears at the very least Miami made an impression.

“Now they are up there," Wall told Scout.com's Evan Daniels. "I’m not going to lie, I wasn’t really considering them that hard, but I hadn’t taken a visit there and I didn’t know how it was going to be and how the coaches were. After I took the visit it really opened my eyes up."

“I feel like I like the school better than I did before,” he said. “I had Miami on my list but I never really considered them. I didn’t know how it was. I knew it was going to be nice in Florida, but didn’t know how it was school wise and that all the players from different sports get along great.”

“From talking to coach [Frank] Haith, I really got a chance to sit down and talk to him one-on-one for a few hours and we watched some film and I just felt like it was a great place.”

Great place? Sure, we've heard that before. But could UM really be the final destination? That remains to be seen. This week, Wall told several reporters he would cut his list of finalists -- Miami, Kentucky, Florida, Duke, Baylor, N.C. State, Memphis -- down considerably before making a final decision.

"I'm going to sit down this week and really talk it out," Wall told TheDevilsDen.com "I think I will have it down to two or three schools by the end of the week. After that I can concentrate just on those schools and make a decision I'm comfortable with."

What will he be considering?

You got to give coach Frank Haith some credit. At the very least, he not only got the nation's No. 1 available player to visit UM, but make them sound great, too. And believe me, other recruits listen.