Can the Canes get back to Omaha?

Mid May has traditionally been the time of year on the South Florida sports calendar when the UM baseball team suddenly begins to draw interest from folks that didn't really care about them except during those early season FSU or Florida series.

Right about now is when coach Jim Morris and his team begin popping up on nightly sports telecasts, and the fairweather fans who no longer have the Heat or Panthers to watch in the playoffs -- or are tired of the up-and-down struggles of the Marlins -- begin wondering how their team is doing in the old "ping league." Even UM football diehards who are glued to Canesport's football recruiting wire will lift their heads up from their computers for five minutes to ask: How many weeks until Omaha?

It's what Morris and his team has gotten us South Floridians accustomed to. They've spoiled us really. What we expect is for the most reliable team in the sports market -- the one that always has that hefty national ranking, the slew of big home run bats, and that combo of left-handers who bring the heat -- to be ready to deliver excitement for about three weeks, to have us on edge and suddenly yearning for that sound (PING!)

Sorry to break it to you casual observers, but the forecast for the pinging Canes doesn't look good. Unless the Canes turn it around big time and in a hurry, the milkshake guy at The Light has served his last Omaha Express. And fans who were hoping to watch Scott Lawson do his stanky leg dance are going to have to hope TV cameras catch it.

Earlier this week, I caught up with the Canes before they left Wednesday in must-win mode for their final regular season ACC series at Wake Forest. Miami, ranked 24th by Baseball America, has gone 8-10 over the past month. The Canes have had plenty of icky losses. North Florida beat them. Bethune-Cookman took two of three from them last weekend at The Light no less.

Players know the only way they'll get to play at home again is if they get hot and stun everyone at next week's ACC Tournament in Durham. So can they do it? And more importantly, can they get back to Omaha? Ask closer Kyle Bellamy that question and he might spit venom at you.

“Of course we can get hot,” said Bellamy who with a 3-1 record, 1.15 ERA and 14 saves has been the only consistent arm on the staff Miami has had all season. “We were No. 2 in the nation for awhile. We’re definitely capable. We just have to get that mentality back we had when we swept the Gators in Gainesville and we took 2 of 3 from FSU. I think we just need to get that chip back on our shoulder – the one we had when were trying to prove to everyone we were a pretty good team."

The problem for Miami is that it's going to take more than an attitude adjustment. It's going to take a major overhaul. Only three hitters -- Scott Lawson (.348), Chris Hermann (.314) and Jason Hagerty (.313) -- are batting better than .300. While ace Chris Hernandez has gotten his act together (he's now 6-3 with a 4.24 ERA after a horrendous start), No. 2 starter David Gutierrez is still looking for his first win since March 7th.

Morris had loftier expectations when the season began despite the fact he lost three first round picks and a boatload of talented players from a team that went 53-11 and entered the College World Series last year expecting to win a fifth national title. But despite the recent setbacks Morris hasn't lost hope. Heck, if Fresno State did it last year why can't the Canes?

“We’ve proven we can beat some of the best teams in college baseball and we’ve proven if we don’t go out and play well we’re not going to win,” Morris said. “We’ve put our backs against the wall no question about that. But I know we can respond. I think we’ve swung the bats really good against some good teams, and any team in the Top 25 has a chance to get hot this time of year. Fresno State was 82nd last year and they won it. We have a lot of young players who can grow up quickly over the next few weeks."

As it stands, even if Miami were to win next week's ACC Tournament, the likelyhood remains they could be on the road in the regionals because the NCAA isn't likely to grant more than two in-state teams the right to host. Both the Gators and Seminoles are ranked higher than UM at the moment and both have had much better regular seasons to this point. As it stands, Baseball America projects Miami will be making the trip to Gainesville.

That doesn't bode well for UM. When the Canes have reached Omaha in the past, they've usually done it playing at home. Of their 23 trips to the CWS, only four were achieved by winning a regional on the road (2006, 1996, 1989, 1984, 1974). Morris said this team in his eyes compares a lot to his 2002 team, which won a regional in Gainesville, but then loss a heart breaker to South Carolina in the Super Regional a week later.

“It’s very important for us to host regionals,” Bellamy said. “There was a lot of inspiration we got our own fans last year in those tight games. Sometimes traveling and being in the airplanes and the hotels can wear on you. Hosting Regionals would definitely be a huge lift. Hopefully, it’s not too late and we can turn it on.”

JUST A FEW QUICK NOTES...
> After spending the past month on Marlins detail, I will be going on the road with the baseball team to Durham next week. So, if you want to talk baseball while I'm there, shoot me some questions on the blog or email. I'll probably be live blogging the games. 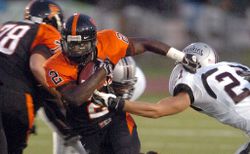 > This week with the Marlins on the road and Clark Spencer on the beat, I got a chance to make my rounds to a few local high schools to catch up on the recruiting front. For those of you interested, I posted three videos -- including an interview with Booker T. Washington running back Eduardo Clements.

While I'm still very skeptical UM will be able to get any of the Tornadoes' top recruits, you should know the Canes at least have a new constant presence on campus. Tim Harris Jr., the son of former coach Ice Harris and a star in track at UM, has begun his high school coaching career this spring at Booker T. He's coaching the quarterbacks. That alone should help Miami stay in contention for Clements, receiver Quinton Dunbar, and defensive end Lyden Trail, who recently picked up an offer from USC.

> As for Miami Springs highly-touted receiver Willis Wright, Miami has definitely offered Wright and is intered in him. But they aren't nearly as interested as Florida State, which has already had five coaches come down to meet with the 6-3, 200-pound receiver in the past year. Miami Springs coach Alex Pacheco told me Monday Wesley McGriff visited the school last year, but no one from UM has been out there yet this spring. Wright got his formal offer from UM in the mail. Physically, Wright is one of the most impressive receivers I've ever seen in Miami-Dade. I'd throw him in the same category as Aldarius Johnson, Dwayne Bowe and Andre Johnson.

> For those of you still on edge over Frank Haith's chase of John Wall, Miami is definitely in the race for the nation's top available recruit. The people I spoke to this week on Wall's behalf told me UM is in his top three and under serious consideration. Wall, by the way, is apparently considering stretching his decision making process past the May 20th deadline.

> In case you missed it, our live weekly Q&As on MiamiHerald.com have been shut down until the start of football season. I'm now doing Marlins Q&As on Tuesdays at 2 p.m. If you want to shoot me questions, feel free to email them to me or place them on the blog. I'm thinking of starting up a Monday Mailbag session if I get some good questions from you.