Rest of '09 recruits arrive Tuesday, minus 2

The University of Miami inked 19 players on National Signing Day and welcomed six in for the spring. Tuesday, the rest of the incoming freshmen will arrive -- if they hadn't already -- when the second session of summer classes begin. 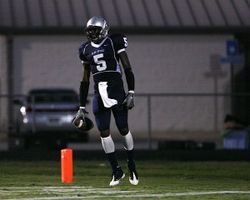 So, who won't be among the new arrivals? So far, it looks like two players -- offensive lineman Malcolm Bunche and defensive back Prince Kent. Bunche told me he's headed to prep school. And although I haven't been able to reach Kent (he and his mom have changed their phone numbers) a source told me his academic situation isn't good and UM is trying to help him find another school (another source told me its Marshall).

But everybody else -- the remaining 11 recruits -- will be ready to go when fall football practices begin in early August.

"My test scores weren't as good as they were supposed to be," Bunche said. "So, I have to go to a prep school. Hopefully, its Milford. I'll spend a semester up there and then I will definitely get back to Miami in January and partake in spring practice.

"I'm disappointed, but I'm not going to stop. I'm going to keep going to where I have to be. This is just a bump on the road."

Bunche said he took the ACT, but failed to score high enough to qualify for UM's sliding scale (GPA, plus test score). He said he was taking an SAT/ACT Prep course and thought he was going to be prepared for the exam. Unfortunately, he says he can't take another exam until September, which is obviously too late to get into Miami. His plan now is to attend either Milford Prep in New York or Hargrave Military Academy in Virginia.

"I'm sticking to my basic workout routine," Bunche said. "I went down from 320 to 315. I guess it's been all the running in the sun for the past two weeks. I'll be back."

> Bunche said he's spent the past two weeks in Miami training with his cousin, fellow UM recruit A.J. Highsmith. Bunch said Highsmith will begin taking classes at UM on Tuesday. He said his cousin expects to spend at least his first season at UM at quarterback.

A FEW NOTES ON OTHER INCOMING PLAYERS...

> Shayon Green said although he was recruited to play defensive end by the Hurricanes, he was recently told by defensive assistant Micheal Barrow he will start out at linebacker. The 6-2 recruit from Tifton, Ga. (the same hometown of UM defensive backs coach Wesley McGriff) said he's put on 10 pounds since the end of his high school season and is now weighing 235. He played linebacker his senior season and racked up 120 tackles and three sacks. He will room with defensive tackle Curtis Porter, who arrived in the spring.

"I can't wait to start classes," said Green, who has spent the past week getting acclimated to South Florida by living with his grandparents and aunt in Homestead. "All this waiting around can drive you crazy."

> Jim Wheeler, the father of offensive lineman Jared Wheeler, said his son is just as anxious about starting classes Tuesday. Wheeler said his son, who will be rooming with tight end Billy Sanders, has put on weight with his offseason conditioning program and is now 6-5, 328. "He's gotten a lot stronger," Wheeler said. "He's got that brute strength, but he can't wait to start with Coach Swasey. He's already up to benching 325 pounds. That's pretty good for a freshman."

Wheeler said UM coaches still haven't told him exactly where he will start out on the offensive line. But Wheeler said he hopes its center. "Jared has the brain and the speed to play center," Wheeler said. "[Jacory] Harris is a tall quarterback, but even still Jared can get down. He could also be a big guard. He's got the long arms."

> As for his younger son, Plantation American Heritage senior Jacob Wheeler, Mr. Wheeler said he recently received his first football scholarship offer from Maryland. The family visited Maryland this past weekend. "Miami wants Jake. Coach Stoutland told him if he decides to put his hand down, he's got a scholarship," Mr. Wheeler said. "But right now, that's Jake's big decision. Does he want to play offensive line or tight end? Everybody keeps telling him he's a lineman. I think he's starting to realize it."

Mr. Wheeler said many schools are recruiting Jacob Wheeler (6-8, 238) not only as an offensive lineman , but as a power forward too. Wheeler plays for the Coral Springs Intensity Jammers AAU Team and will be traveling to Las Vegas and New York for tournaments. "He's played with Kenny Boynton for two years so a lot of people have seen him," Mr. Wheeler said. "They just haven't seen him with the ball a whole lot. But they like him. Coastal Carolina, Fordham and Rutgers have all talked about him playing both sports at the next level. Miami hasn't yet." 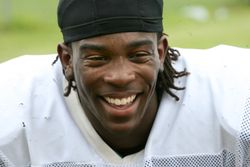 > Sanford Seminole coach Mike Cullison said both of his former players -- safety Ray Ray Armstrong (UM's most highly touted recruit) and defensive end Dyron Dye -- have already been in Miami for more than a week and will start classes Tuesday.

Armstrong, whom Cullison has compared to Sean Taylor in the past, will wear No. 26. Armstrong (6-4, 215) broke his finger after the season, but will not miss any time according to Cullison. Cullison said although Armstrong could put on some weight and play linebacker, he expects him to play safety.

"I've never coached a kid as competitive as Ray Ray," Cullison said. "He's not going to come out of the game with a bump. They'll have to drag him off the field. I spoke to him last week because I didn't get a chance to say good-bye to him. He's read for this. He's ready to let loose and be a leader."

As for Dye (6-5, 230), he thinks he'll end up switching positions -- from defensive end to tight end -- before his career is done. ""He's got so much upside to him that he doesn't know how good he can be," Cullison said "But I think he could end up being a tight end -- if they use a tight end. He blocks very well. His hands are getting better. He's already got that quick first step. I think he could play in the league as a tight end."

> Speaking of tight ends, Stephen Plein said he's finally all ready to go and begin taking classes at UM on Wednesday. Plein tried enrolling in the spring, but was held up by the NCAA Clearinghouse. They finally passed him through two weeks ago. The holdup? "They made me take an online class over," Plein said. "So, I took online journalism at Brigham Young. It was actually kind of fun."

Plein said he's been working hard in the offseason with a speed coach -- former Tennessee assistant Wes Parker, who lives in the Fort Myers area. Plein said he's brought down his 40-time from 4.9 seconds to 4.62 seconds. He's now 6-6, 255 and eager to provide a hand at a position UM sorely needs help at. He played tight end before moving to Fort Myers his senior year, where he spent the season at defensive end.

"I saw coach Pannunzio about three weeks ago when I went down to UM for my physical," Plein said. "He hadn't seen me since the spring. He was like 'Dang, you could start for me right now.' I just want to help any way that I can."

> Under-Armour All-American defensive back Jamal Reid said he's put on about 10 pounds of muscle in the offseason and now lists himself at 6-1, 178 pounds. Although he could play cornerback, he said UM coaches want him to come in at safety because of his playmaking abilities. He said he will be rooming with defensive end Olivier Vernon.

Reid said he's talked to Randy Shannon about playing baseball in the spring time. Reid was an outfielder at Mayo Lafayette. "Coach Shannon said as long as I keep my grades up, I can play baseball too," Reid said. "I'd love to do both. I'll be meeting with Coach [Jim] Morris when I get there."