Another day, another player to focus on as we continue the countdown of the top 60 players at the University of Miami. Next on the list: No. 23, defensive tackle Joe Joseph, who wasn't very highly regarded coming out of high school but has started 14 games for UM in the past two seasons. 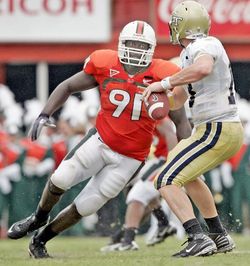 > What we heard about him on Signing Day '05: Big Joe wasn't very highly regarded coming out of Orlando Oak Ridge High. Rivals.com tabbed him as the 32nd best defensive tackle in the country. He was ranked last among the three defensive tackles UM signed its class (Kellen Heard and Antonio Dixon were rated higher).

> What he's done as a Cane: While linebacker Darryl Sharpton is probably the biggest overachiever in the Class of 2005 (Sharpton is projected to be UM's top NFL Draft pick according to ESPN and Scout), Joseph isn't far behind. After spending two years on the scout team, he played a bunch in 2007 as a sophomore for a beat up UM defensive line, starting five games and compiling 25 tackles. Last year, he started nine games and made 35 tackles and one sack. He returns to UM for his senior season as the most experienced defensive lineman on the team next to Eric Moncur (16 starts).

> What Eye On The U expects from him in '09: At 6-3, 302 pounds, Joseph is a consistent meat-and-potatoes option in the middle for UM. He isn't flashy, but he usually gets the job done. His bench (395) is tied for second among defensive tackles with Marcus Forston and ranks right behind big burly Allen Bailey. Joseph's 480-pound squat ranks ninth, and second among defensive tackles. So, brute-strength wise, he's got what it takes to be yet another solid contributor on the defensive line this coming season. We expect him to start opposite Marcus Forston or Allen Bailey and play a ton.