As we move forward in the countdown of the Top 60 players at UM, we look at yet another defensive back: No. 26 Demarcus Van Dyke. 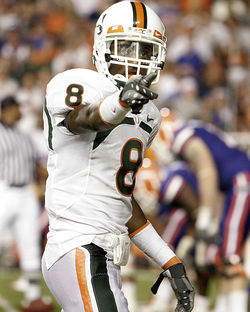 > What we heard about him on Signing Day '07: When DVD decided to stick with the Hurricanes instead of jumping ship to the Gators on Signing Day, it was big news for UM. A consensus Top 25 player in the state of Florida, Van Dyke had speed to burn at Monsignor Pace. He posted a 4.3 in the 40-yard dash in high school and was rated in the Top 20 nationally among athletes by Rivals, Scout and SuperPrep. He finished his senior season with 56 tackles, 7 INTs and caught 21 passes for 417 yards as a dual threat. At 6-1, 160 pounds, the only worry was his weight and how quickly he might be able to put some for the college game.

> What he's done as a Cane: Upon arrival at UM, Van Dyke was nearly an instantaneous hit. He started the season opener against Marshall and had three tackles. He's been on a downward slope ever since. After making eight starts as a freshman and compiling 14 tackles and one pass breakup, he saw the field even less as a sophomore. He started just twice and compiled 16 tackles and one pass breakup. He enters his junior year still without an interception in his college career and still without solidifying a starting spot despite tallying a career high 5 tackles in the Emerald Bowl. This spring, incoming freshman Brandon McGee arrived and immediately began pushing Van Dyke and sophomore Brandon Harris in terms of performance Will Van Dyke answer the bell now that he's a little bigger and more seasoned? He started in the spring and had five tackles. But will we see more consistency?

> What Eye On The U expects from him in '09: DVD should start the season as the team's No. 2 corner next to Brandon Harris. We'll emphasis the word should. What he does after that remains a mystery. At 6-1, 185 pounds he ought to be able to handle bigger receivers. He certainly has the speed to keep up with most. But he has to show he can make plays consistently and not get burned (remember the Emerald Bowl and the North Carolina game). If he develops the way he should, DVD has the size and goods to be a solid starting cornerback in the ACC. But if he doesn't, he'll be the same player who sat on the sidelines most of last season.

A LOOK BACK AT THE FIRST 10 PLAYERS RELEASED...