As we move ahead in our countdown of the Top 60 players at UM, we take a look t No. 27: Defensive back Ryan Hill. The senior has played on both sides of the ball in his career after coming to UM in 2006 with a lot of hype. But has he really ever found a home on the field for his talents? 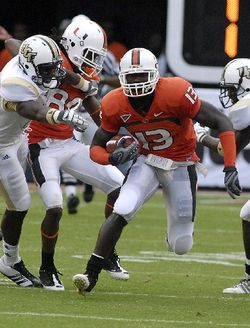 > What we heard about him on Signing Day '06: The cousin of former FSU star Corey Fuller, Hill came to UM with plenty of hype and skills similar to that of No. 58 on our countdown Jamal Reid. As a two-way standout at Tallahasse Rickhards High, Hill made three interceptions and 54 tackles on defense and caught 26 pases for 488 yards and six touchdowns on offense. He played in the CaliFlorida Bowl and was rated the fifth-best cornerback in the country by Rivals.com and fourth best by Scout.com. Most considered him the best player in UM's 2006 class.

> What he's done as a Cane: Hill basically took one for the team his freshman year, moving over to receiver where UM had failed to recruit any talent of substance for nearly three years. The problem was, he didn't play much when he was there. Of his 23 games his freshman and sophomore year, he started two games and caught a total of 11 passes for 182 yards and two touchdowns. He also had one huge drop at Maryland as a sophomore. Last season, with the Canes thin on depth in the secondary, he moved back to safety and started the final five games, recording 34 tackles with one pass breakup. Hill played in the spring, but was passed up on the depth chart by redshirt freshman Vaughn Telemaque and fellow senior Randy Phillips. He had five tackles (4 assisted) in the spring game.

> What Eye On The U expects from him in '09: There might not be a player tougher to figure out than Hill, who obviously has the talent to play, but never really seems to have found a home. If he was such a great cornerback coming out of high school, how come not once in his three years has he played there? At 5-11, 203 pounds, Hill will find himself on the field again somewhere for Miami, even if its in a backup role at safety. But I'd love to see him get a shot at cornerback. After all, what is the worst that can happen?

Here's an interview our Mollie Rose conducted with Ryan in the middle of last season during our Getting To Know The U segments.