Time to resume the countdown of the Top 60 players at The U with No. 28, cornerback Brandon McGee. He's only a true freshman, but he's very good and could be the answer to a big problem at cornerback for the Canes this season. 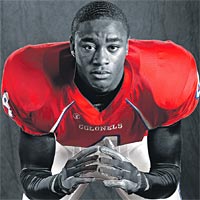 > What we heard about him on Signing Day '09: McGee is a kid I met early on in the recruiting process and grew to like right away. His story is unforgettable. His mother died when he was young and his stepfather survived throat cancer and has raised him since she passed. McGee, who grew up an FSU fan, basically chose UM so he could remain close to his home in Plantation. The Canes certainly lucked out. He was a two-way star at Plantation, starring at quarterback and playing mostly safety. He finally got a chance to focus on cornerback his senior year. He was a U.S. Army All-American and ranked a consensus Top 10 cornerback in the country.

> What he's done as a Cane: McGee enrolled in UM in January and played in the spring, intercepting a pass in a scrimmage and returning it for a touchdown. He then suffered a hand injury (broken finger) and missed the spring game.

> What Eye On The U expects from him in '09: Hand injury or not, McGee was impressive in the spring because he made plays at a spot Miami hasn't had much playmaking from of late. With the sophomore Brandon Harris, junior Demarcus Van Dyke, converted receiver Sam Shields and senior Chavez Grant as his competition for playing time, Eye On The U believes it may not be very hard for McGee to win a starting job in the fall. That being said, whether he starts or not, the 6-foot, 185-pound McGee is going to play one way or the other. His 4.23-time in the 40-yard dash this spring and physical nature could make him UM's best cornerback by the end of the season. Yes, we expect a lot from Brandon McGee.