As we continue our countdown of the Top 60 players at UM we take a look at No. 57: Redshirt freshman defensive end Gavin Hardin, who is a darkhorse to emerge on what should be very young and deep Canes defensive line. 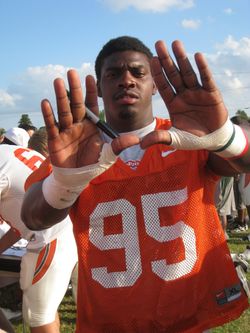 > What we heard about him on Signing Day '08: Hardin was considered the fourth-best recruit in the state of Tennessee at Central-Merry High. Even though he played for a 2-8 football team, Hardin proved to be a two-way star, racking up 80 tackles and five sacks at linebacker while playing some at fullback. A PrepStar All-American, he picked UM over Mississippi.

> What he's done as a Cane: The 6-3, 240-pounder played some against Charleston Southern in the opener, then played on the scout team the rest of the year where he earned Defensive Player of the Year honors.

> What Eye On The U expects from him in '09: Hardin has several other players currently in front of him on the depth chart -- including freshman Olivier Vernon, who was impressive and got the start with the first team in the spring game. Hardin has the goods to get into the rotation at defensive end this year, but could find himself back on the scout team if others outperform him in practice and in games.

By the way, ESPN's Heather Dinich ranked Canes linebacker Sean Spence 11th in her countdown of the Top 30 players in the ACC. You got that one right Heather!