As we continue to count down the Top 60 players at The U, we take a look at No. 58: Incoming freshman Jamal Reid, a highly-touted prospect who will likely be among the few new additions to see playing time right away if he lives up to the hype. 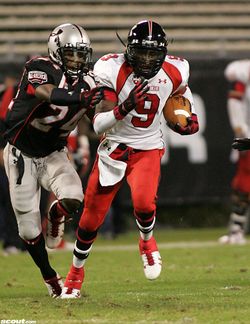 > What we heard about him on Signing Day '09: Reid comes to UM from a small school in the middle of the state -- Mayo Lafayette High -- but as one of the best athletes in the country. He starred at Mayo on both sides of the ball, catching 49 passes for 1,224 yards and 17 touchdowns and recording 68 tackles and six interceptions as a defensive back. He was selected to the Under-Armour All-American game and had four catches for 65 yards and a score.

> What he's done as a Cane: Nothing yet. He's expected to arrive at UM in a few weeks -- in time for fall practices.

> What Eye On The U expects from him in '09: There aren't many recruits in the Canes last signing class who will come to UM with a much buzz around him. The question is where does Randy Shannon put him on the field -- offense or defense? Reid said he's been told he'll come in as a safety. But with how deep the Canes are at the position right now with veterans and a young talent in Telemaque, it might not be long before Reid is asked to play a bigger need position like cornerback. At 6-1, 195-pounds and with special playmaking abilities, Eye On The U doesn't expect Reid to be standing on the sidelines very long. Somehow, some way, he'll have to get into the game. He's just too good.

Here is his highlight tape from high school...