« Has UM found its next QB recruit? | Main | Penn State corner could transfer to UM »

Stephen Morris was going to visit UCF this weekend and had plans to check out Purdue. But his visit to the University of Miami Wednesday with his parents and high school coach convinced him he didn't need to be recruited anymore. 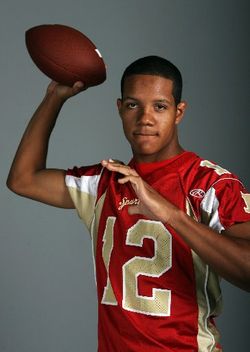 Friday morning, the Miami Monsignor Pace quarterback called Hurricanes coaches and told them he wanted to be a part of their 2010 class.

"The more I kept thinking about it, the more I felt like I had found a home," Morris said. "It's just the perfect place for me athletically and academically. I don't need to go anywhere else to figure that out."

Morris (6-3, 186) said he's "good" and will likely not visit any other schools. If he sticks and signs with the Canes, he'll likely be the only quarterback UM signs in its 2010 class.

Recruiting coordinator Clint Hurtt said in February UM was targeting just one in a class that would end up with between 22-23 players. Morris is the 14th commitment in the Canes 2010 class.

Morris finished his junior year completing 64 percent of his passes with 2,005 passing yards, 19 touchdowns and nine interceptions. But he didn't receive a UM offer until earlier this month. Offensive coordinator Mark Whipple first checked him out in the spring, when his only offers were from FIU, Purdue and Virginia. He is rated the 27th best dual threat quarterback by Rivals.com. He is not rated by Scout.com.

"The first time coach Whipple saw me he came to one of the spring scrimmages and it turned out to be one of my worst practices," Morris said. "We were out for prom the night before and we all looked like we didn't want to be there. But he said I had a lot of composure when things weren't going well. He said he was looking at all my intangibles and that's what impressed him."

Morris said when he visited UM he got a chance to take a look at the Canes playbook and broke down film with Whipple.

"This was my second time opening up their playbook, but we went a little more in depth into what they do," Morris said.

"The type of offense they run is almost the same as Pace. The combinations is similar to what we do. I talked to Jacory [Harris] a little bit about it. He's going to be a great quarterback with coach Whipple. He was saying how much he loves it. His playbook is just like the NFL. All he did was lessen it down so it's at a college level. We watched how Donovan [McNabb] and Ben [Roethlisberger] ran it and the things they did well and what they did wrong and how it relates to Miami. All I can say is I'm excited. You definitely feel like this offense will get you ready for the NFL."