Another day, another player to zero in on in our countdown of the Top 60 players at the U. Today we take a look at No. 46 on the list: Defensive end Andrew Smith. The sophomore is another talented young player on UM's defensive line who will see playing time in some capacity this coming season. 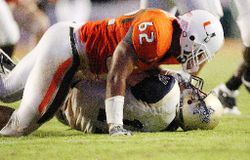 > What we heard about him on Signing Day '08: Smith was certainly an under the rader recruit at Coconut Creek Monarch High. Despite making 80 tackles and 15 sacks as a linebacker and defensive end his senior season, most recruiting websites weren't impressed with the 6-2, 238-pounder. Scout.com rated him the 45th best defensive end in the country. ESPN had him 89th. Rivals.com didn't even have him ranked and considered him a 2-star recruit. Defensive line coach Clint Hurtt, however, was always big on the kid and convinced him to sign with UM over Iowa, Indiana, Troy and FAU.

> What he's done as a Cane: Smith didn't have an explosive freshman season. But he played in eight games -- more than some other freshman who came more highly regarded -- and finished with nine tackles. He even had a sack in the win against Charleston Southern. This spring, he remained in the rotation at end and had five assists in the spring game.

> What Eye On The U expects from him in '09: Aside from receiver, the position with the most depth and talent at The U is clearly defensive end. Smith is a player who stands behind some other talented young players at his position -- Adewale Ojomo, Marcus Robinson, Allen Bailey. But all it takes is one injury and Smith could see himself seeing major minutes. The fact he played in eight games and was in the rotation already as a freshman tells us he earned Hurtt's respect to be given playing time. If he continues to grow and contribute, he could develop into one of the season's bigger surprises -- especially on third downs when Ojomo, Robinson and Bailey might head out for a breather. Either way, we think Smith has potential to be another dangerous weapon in UM's deepest position on defense.