Are you ready for some football?

I am. Personally, I'm tired of all this preseason talk and I'm excited we are finally going to start seeing the guys we've been writing about run around with helmets on. Canes football season officially gets going in a few hours at Cobb Stadium. 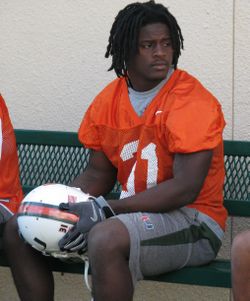 THE SCHEDULE: Friday was the first day of organized team activities and included orientation sessions, equipment pick-up and team meetings. An Exclusive Season Ticket Holder Practice will get underway today at 8 a.m. (a practice open to only season ticket holders and members of the media). The school's Hall of Fame will also be open and fans will be able to pose for photos with Vinny Testaverde's Heisman Trophy.

The Hurricanes will work in helmets and shorts Saturday and Sunday, shells on Monday and Tuesday before moving into full pads starting Wednesday. After Saturday’s practice at Cobb Stadium, the team will move over to the Greentree Practice Fields for the remainder of fall camp (which will be closed to the media). Two-a-days will start Thursday, Aug. 13 and the team will have closed scrimmages on Aug. 15, Aug. 21 and Aug. 25. The final practice of camp is Monday, Aug. 31.

MEDIA ACCESS: It won't be great or like it was this spring when we actually got a chance to watch the team practice. So, if you're looking for detailed practice reports they won't exist anywhere. After Saturday, we only get to watch the team stretch But we will be able to talk Shannon every day and up to eight players a day. We'll have to find out what's going on through those interviews.

Here are some of the questions I hope we'll find answers to by the time camp ends:

1. Which young offensive linemen will really be able to help UM this season? There isn't a bigger question mark on the team than the Canes depth up front. After Jason Fox, Orlando Franklin, A.J. Trump and Joel Figueroa, the level of playing experience dwindles quickly. Matt Pipho, expected to the be the starting right tackle, has no career starts and little playing experience. Beyond him, guards Harland Gunn (UM's strongest lineman) and freshman Brandon Washington and tackles Benjamin Jones and Jermaine Johnson will try to progress quickly enough to be ready should any of Miami's starters go down with an injury. Or could true freshmen Cory White or Jared Wheeler surprise us? Or will Fox, Franklin, Trump, Figueroa and Pipho have to really play all 60 minutes come Sept. 7?

2. How much better will this run defense be under new coordinator John Lovett and with several key players back, including the physically gifted Allen Bailey now permanently at defensive tackle? Beyond strong quarterback play and a wealth of playmakers, UM's calling card has always been the ability to stop the run. The Canes were the worst in the ACC at doing it last year. Will Lovett bring back that attitude? How much will having a healthy Colin McCarthy help? And will Miami's corners actually bring people down instead of arm tackling?

3. How much will the tight end position really be able to help UM this season? Dedrick Epps, trying to fly back from an ACL injury, swears he'll be ready to take a hit and participate in camp. Is he really 100 percent? What is going to happen when he does get hit? How will Jimmy Graham look in a football uniform? His teammates love the way he's played on 7-on-7. But what happens when the pads go on? Are the Canes just going to quietly phase the tight end out of Mark Whipple's offense by the end of camp?

4. How much better will the Canes secondary be? Turnovers, turnovers, turnovers. That's all Brandon Harris and Demarcus Van Dyke have been hearing about. The Canes had just four measely interceptions last year. Is John Lovett's new defense going to allow Harris, Van Dyke and the rest of UM's secondary to play more aggressively? Will Harris and Van Dyke become the dominant cover corners UM needs them to be?

5. Which underachieving veterans will step up there game? We know all about how talented UM's young players are. We expect big things from Sean Spence, Jacory Harris, Aldarius Johnson, LaRon Byrd, Marcus Forston, Marcus Robinson and a cast of other sophomores and redshirt freshmen. But which underachieving veterans are finally going to show us they can help this team out too? Outside of Jason Fox, there haven't been many. Eric Moncur, Colin McCarthy and Randy Phillips are seen as veteran leaders. All three were expected to do big things at Miami. But injuries have slowed them. Who makes the biggest splash? When will we Chavez Grant, Darryl Sharpton, Leonard Hankerson, Javarris James or Sam Shields do something big for this team?

There aren't a ton really. But I'll provide the ones I believe will at least be intriguing.

> Right tackle: Jeff Stoutland is standing behind Matt Pipho. He says he can do the job at right tackle. But what if he falters? Ben Jones was battling behind him in the spring along with Jermaine Johnson. I've heard Joel Figueroa could get a look.

> Receivers No. 5 & 6: Randy Shannon said the rotation at receiver will get shorter. OK. But no shorter than six really. After Aldarius Johnson, LaRon Byrd, Thearon Collier and Travis Benjamin, four guys will probably end up competing for two spots. I believe it will between Tommy Streeter versus Leonard Hankerson (on the outside) and Kendall Thompkins and Davon Johnson (on the inside).

> Third string RB: Freshman Mike James stole the spotlight in the spring while Lee Chambers sat out with an injury. Damien Berry won Spring Game MVP honors. Lamar Miller arrived on Friday. Running backs not named Graig Cooper or Javarris James combined for 62 carries, 289 yards and 3 TDs last year. Who will vault to top of the pecking order for scraps? My money is on Smiley.

TWITTER UPDATES: Last, but not least. I'll be out at practices throughout the week. Whenever anything important breaks, I'll post news and notes on my twitter page. Look me up at HeyNavarro