Finding the University of Miami's weakness last season was easy for opponents. It was the Hurricanes' run defense. The collective numbers were about as ugly as it gets for a program that has always prided itself in stuffing the run. 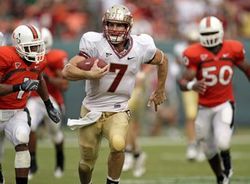 How ugly was the Canes run defense in 2008? UM allowed 1,974 yards on the ground -- a 151.85-yard average that ranked worst in the ACC and 75th in the country. It's an amazing drop off when you consider in 2006 UM's run defense allowed just 882 yards the entire season -- tied for fourth fewest in the NCAA and tops in the ACC. That season just so happened to be the last year Randy Shannon was defensive coordinator.

The Canes have been getting progressively worse at stopping the run with a different guy calling the shots on defense. In 2007, UM ranked 40th against the run (133.75 ypg) and eighth in the ACC under Tim Walton. Bill Young obviously didn't do any better last year.

UM didn't just give up more yards collectively, they were often gashed by long runs and big plays. N.C. State and California each ran for more than 200 yards on UM in the final two games of the season.

But nobody had more success against the Canes running the football than UM's first two opponents this year -- Florida State and Georgia Tech. The Seminoles, behind scrambling quarterback Christian Ponder and running back Antone Smith, ran for 281 yards and had 14 runs of 10 or more yards against UM. Georgia Tech carved up the Canes for 472 yards and 13 runs of 10 or more yards.

So what makes linebacker Sean Spence feel like the Canes will not get pushed around in 2009?

Size definitely matters when it comes to college football. And if you watched the Hurricanes last season on defense you know it was more than just the size of the depth chart and injuries that held UM back. Sure, Spence earned ACC Defensive Rookie of The Year honors. But he played most of the season right at or under under 200 pounds. For all of the great plays he made as the team's third-leading tackler and leader in tackles for loss, he admits he often got bounced around by bigger linemen and was out of position to make plays.

"Last year, I was more like a ping pong. I'd bounce off a guy, bounce off another and then make a play," said Spence, who came to UM weighing 193 pounds. "Now, I'm taking on blocks, breaking through the blocks, making tackles."

Spence is now 212 pounds. His linebacker mates are bigger too. Ramon Buchanon, who moved over from safety where he was weighing 200, is now 220 and backing up Spence on the strongside. Jordan Futch, considered UM's first linebacker off the bench, came to UM weighing 205 pounds. He's now up to 230.

"We were probably the smallest linebacker group in the nation last year," Futch said. "We had no depth because guys were hurt and we had no size. Now, we're knocking heads off literally. I feel like it's helped me a lot. I know its helped Sean a lot. Sean was always a big hitter. But he's filling holes. Buchanon lights people up. When you see that weight and the speed we have, it's awesome. We're going to be much better stopping the run than we did last year."

The return of Colin McCarthy from a season-ending shoulder injury is another reason Spence is excited. McCarthy, the projected starter on the weakside, has made a huge difference just in practice according to Spence.

"Colin is a great player, vocal leader," Spence said. "He's another playmaker. He'll make interceptions, pick up fumbles. He's a great open field tackler. I watch him a lot and where he fits up on guys. We missed him bad."

While the Canes have sustained a few injuries to its defensive line this fall (Adewale Ojomo, Eric Moncur, Dyron Dye), Spence said he sees improvement in the guys in front of him. Defensive tackle Marcus Forston and Micanor Regis, both freshmen last season, have been praised repeatedly throughout camp by Shannon. A healthy Allen Bailey in the middle has also made a difference according to Jason Fox.

"Our d-line got a lot better," Spence said. "Guys are sitting in the right gap, wrapping up, anticipating and reading assignments. We're not going backward anymore.

"Last year, guys weren't really buying into what we did last year. Guys are all on one page now. We're ready to stop the run."

The first test is Monday.