As practice moves along, I want to make sure we wrap our series of counting down the Top 60 players at UM. After today, we've got six left. Here's a look at No. 7: Linebacker Colin McCarthy.

If this was a list about guys who were missed last season, McCarthy would be No. 1. His departure following a shoulder injury, devastated UM's run defense. Now healthy, the 6-3, 242-pound junior (who has two years left of eligibility) can't wait to start drilling opposing running backs. 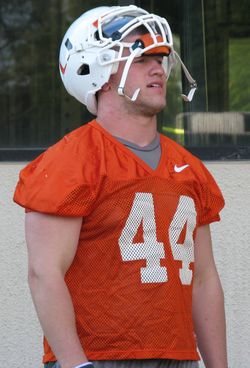 > What we heard about him on Signing Day '06: An all-state linebacker at Clearwater Central Catholic, McCarthy finished his senior year with 133 tackles, four sacks, and one interception. On offense, as a tight end and receiver, he caught 38 passes for 644 yards and seven touchdowns and went on to play in the CaliFlorida Bowl All-Star Game. He was rated the 24th best outside linebacker by Rivals.com and 36th by Scout.com. When he chose UM over Ohio State, Nebraska, Florida, Georgia and Indiana, Canes fans believed they were getting a new version of Dan Morgan.

> What he's done as a Cane: After playing in nine games and blocking a punt as a true freshman, he moved into the strongside linebacker role in 2007 and started 10 games, finishing fifth on the team with 74 tackles -- including a team-leading 12 for loss. His fumble return at FSU for a touchdown iced a 37-29 come-from-behind victory for the Canes. He returned for his junior season and started at strongside linebacker for UM's first four games before a shoulder injury sidelined him for the rest of the year. McCarthy had season-ending surgery and skipped the spring to continue recovering per Randy Shannon's orders.

> What Eye On The U expects from him in '09: Miami's run defense slipped from finishing 40th nationally in 2007 (133.75 yards per game) to 75th last season (151.85 ypg) and last in the ACC. It wasn't by accident. When McCarthy played in his final game against North Carolina on Sept. 27, UM's run defense actually led the ACC and ranked seventh nationally (65 ypg). Once he went out -- along with Eric Moncur -- UM had to turn to its younger players to hold fort. It obviously didn't happen. McCarthy isn't going to cure all of UM's woes, but a healthy season alongside ACC Defensive Freshman of the Year Sean Spence will absolutely make the Canes linebacking corps better. McCarthy will probably remain outside, but he is working in the middle along with Spence. If Shannon or new defensive coordinator John Lovett feel Darryl Sharpton can be replaced in the starting lineup by sophomores Ramon Buchanon or Jordan Futch, they won't hesitate. In that case, McCarthy will likely move to the middle. It will only help solidify the Canes defense and likely lead McCarthy to become UM's leading tackler this season.