If Jacory Harris was Batman for the Hurricanes in Tallahassee on Labor Day night, Travis Benjamin was most certainly Robin. 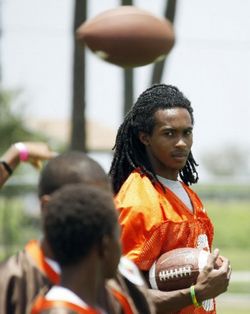 The 5-10, 175-pound sophomore was there every time his quarterback needed him. He hauled in a 39-yard touchdown pass on the opening series, then used his 4.2 speed to zoom past two FSU defenders and set up UM's winning touchdown by straddling the sideline with a 40-yard reception deep in Seminole territory. Benjamin finished with a team-leading four receptions for 128 yards as Harris connected with six receivers for gains of 20 yards or more on nine different plays.

UM coach Randy Shannon would love to see more of that Thursday against Georgia Tech, who blew a 24-point lead against Clemson and got shredded by speedy receiver Jacoby Ford. With leading receiver Aldarius Johnson (groin) expected out, Benjamin and Leonard Hankerson -- who had a breakout performance of his own -- will likely be counted on the most again to create big plays in the passing game.

Stringing together back-to-back big games, however, wasn't one of Benjamin's specialties as a freshman. After compiling 274 all-purpose yards against FSU last year, Benjamin rolled an ankle and became pretty irrelevant over UM's final five games. After catching four passes for 72 yards against Wake Forest, he caught three balls for 47 yards the rest of the year. Over that stretch, he had one punt return for one yard and returned six kicks -- none longer than 23 yards.

Benjamin said Monday it's important for to remain consistent in the Canes passing game. "Last year I would have a big game and then the next week I wouldn't have a big game,” Benjamin said. “This year I am looking forward to every time I get the ball in my hands to do something big with it.

“I am expecting to do more than what I did last year. I was just a special teams guy last year. This year they are using me more on offense because of my speed and ability to get open anywhere on the field.”

Benjamin said he felt he did a much better job against FSU coming off routes and looking the ball in, something he said he struggled with in the past. "Last year I would kind of hesitate on my routes," Benjamin said. "This year, I know what to do with my routes and I'm precise with it."

> MR. SERIOUS: TV sets probably portrayed Jacory Harris a little too serious as his teammates celebrated their win against Florida State. Turns out, as Harris told us Monday, he didn't want to celebrate until he knew the game was really over. When he knew it was over, after a brief review by officials, he joined the Canes party.

Cornerback Brandon Harris said Jacory cut loose in the Canes locker room a little more in the team's private post game celebration. But by the time the team was boarding it's chartered flight to return to Miami, UM's quarterback was Mr. Serious again. "That's what makes Jacory so special as a quarterback. He's never satisfied," Brandon said. "He always wants to strive for more. And he never cracks under the pressure."

UM'S D LOVETT'S HIM: Speaking of cutting loose, turns out new defensive coordinator John Lovett is pretty good at keeping his players on their toes through the week. When he isn't screaming in their ears for a laugh, he's jumping out and scaring them for fun.

"Coach Lovett is probably one of the funnest coaches I've ever played for. He's football smart. He knows his stuff and he has an amazing personality. But just being around Coach Lovett, you're guaranteed laughs and enjoyment everyday -- even when your down," Brandon Harris said. "He makes you have fun. It's hard to explain. You just have to know Coach Lovett. He'll hide in a dark area, jump out. He's just a fun guy. You don't see that from coordinators at the college level. He's very relaxed. A lot of the guys, they respond well to him."

We'll find out soon enough if Lovett has something scary looking for Georgia Tech's triple option offense. Word is a lot of what North Carolina ran to stump the Yellow Jackets last year has been included in the game plan.

WOUNDED WIRE: The Canes are supposed to release their upper extremity/lower extremity injury report in a day or two. While we're waiting, here's what I heard late Monday night regarding two players of interest:

> A Canes source said cornerback Demarcus Van Dyke remained hopeful to be cleared to play this week after suffering a concussion on the opening series against Florida State. Chances are, however, he won't and Sam Shields will start in his place.

> A non-UM source told me defensive end Adewale Ojomo is expecting to have the wires keeping his broken jaw shut removed in the next week. Ojomo was at a big South Florida Youth Football League game this past weekend (Scott Lake vs. Bunche Park) featuring the younger brother of linebacker Sean Spence with several other Hurricanes players. Ojomo, noticeably thinner, told friends he's lost more than 30 pounds since he was sucker punched by a UM walk-on during camp. But he remains hopeful to return to the Canes in time for the Oklahoma game on Oct. 3.