All was quiet at UM Tuesday as the team participated in a closed afternoon practice before taking Wednesday off. Coach Randy Shannon is set to speak with reporters Wednesday during his first ACC Teleconference of the year and then players will talk again after practice resumes Thursday.

I figured the best way to kill time after today's Canes afternoon chat was to recap the end of camp and piece together what I think the depth chart will look like after a few injuries and surprises. Shannon will hand over his version of the depth chart to reporters later this week. But first, Camp Rewind. 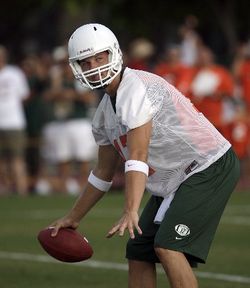 > Best thing to happen for UM at camp: The development and health of the tight ends. Not only did Dedrick Epps' injured knee hold up, but Jimmy Graham made the move from the basketball court appear like its going to be a success. There were serious concerns entering camp UM might not have a real tight end target to throw to. Now, it looks like there are two.

> Biggest story from camp: The departure of backup quarterback Taylor Cook. Everyone around UM knew Cannon Smith (6-0, 205) was probably never going to take a snap in a game for the Canes. But when Cook approached coaches last week about transferring there was genuine surprise. The 6-7, 235-pound quarterback looked like he had made strides under offensive coordinator Mark Whipple and would be a good backup to Jacory Harris if he ended up sidelined. Now, true freshman A.J. Highsmith (6-0, 195) is the backup. Even though Highsmith has done well in camp according to teammates, he's still undersized and fresh out of high school. And now there is real reason for concern if Jacory ever goes down.

> Biggest injury: The loss of defensive end Adewale Ojomo. The sophomore as making huge strides and now he's likely done for the season with a broken jaw after being sucker punched in the locker room by a walk-on. Miami's defensive ends were expected to be the strength of the defense. Now, the Canes look average at best with senior Eric Moncur (groin) doubtful and redshirt freshman Gavin Hardin (neck) expected out for the season.

> Most encouraging sign: The defense is creating turnovers. Every day we heard about a different player in the secondary making an interception or a big play. With new defensive coordinator John Lovett playing more of a Randy Shannon style, in-your-face defense, players have said they feel more comfortable in the system and it has allowed them to break on more balls and play with more confidence.

> For those of you who have been asking, The Herald's football preview will be out Thursday.