Jacory Harris is blowing up

So this is what happens when you win two nationally televised games and put The U back on the map. Jacory Harris has certainly discovered what it feels like to be a star over the last 48 hours. He's not only become an instant Heisman candidate according to ESPN and had a new Heisman site developed in his honor, but his name has been on a lot of people's lips across across the country. Or, their Twitter accounts anyway. At one point Friday, Jacory Harris was actually one of the most popular tweets around. Not just the average Joes either.

> Deadspin.com joined the action, wildly declaring "Miami quarterback Jacory Harris will be the #1 pick in the 2011 NFL Draft. He'll be just like JaMarcus Russell, only he'll be good instead of grossly obese."

HAITH CHIMES IN ON GRAHAM'S TD: I caught up with UM basketball coach Frank Haith earlier this afternoon and had a good laugh with him about Jimmy Graham's first catch and touchdown Thursday night. Haith, who was in athletic director Kirby Hocutt's skybox for Thursday night's game, said his wife cried tears of joy when his former 6-8, 260-pound power forward made his first big football play. He said everyone in the box -- including his son -- went nuts. 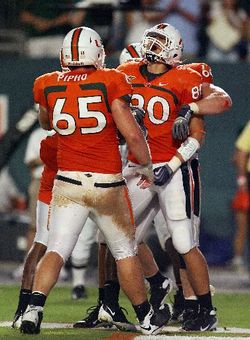 But Haith said he couldn't help himself from giving Graham a nice ribbing for his ugly touchdown celebration. "I told him afterward his celebration lacked creativity. He knew he couldn't spike the ball or dunk it over the goal posts. But whatever it was he did, bobbing his head, it was hilarious. I told him 'You got to practice some in your room. Run off the field, chest bump somebody, give Jacory [Harris] a helmet tap, something. You can't look lost again."

Graham said Thursday he didn't celebrate much because he had to go back in to block on the ensuing extra point and was just kind out of it. So far, he's been targeted three times and made one catch. "I feel like I've worked hard, learned a little bit and hopefully each game I can help this team and I can prove I'm a football player," he said.

For what it's worth, Graham has only been playing football for eight weeks. Harris said he did the right thing finding the open space for the touchdown. He said he's focused on doing the right things, he doesn't partake in trash talking. "With football, there are so many fans and I'm usually just thinking about he just called, I zone everything out. I'm thinking 'What do I have to do on this?' And I'm making sure to do it right."