Notebook: Few freshmen to play in '09

Last season, Randy Shannon entered the season knowing he was going to have to play freshmen all over the field. This year, he’s happy he won’t have to do that. 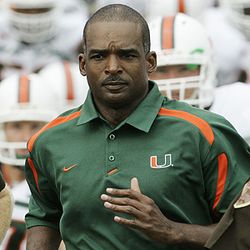 When Shannon met with the local media Thursday to discuss Monday night’s season opener at Florida State and the start of his third season at UM, he smiled when he was asked how many freshmen might see the field. “Four or five -- a lot less than last year and hopefully next year it will be a lot less too,” Shannon said.

In case you forgot, the Hurricanes played 18 freshmen in their season opener last year against Charleston Southern. By the end of the season, the Canes were counting on a number of first year players to deliver in key roles. One look at the Canes’ depth chart, released to reporters after Shannon’s press conference, tells us 2009 is going to be a different kind of season.

Only five true freshmen made the two-deep – quarterback AJ Highsmith, left guard Brandon Washington, defensive end Olivier Vernon, running back Mike James (kick returns) and right tackle Jermaine Johnson. And only one former scout team player from a year ago – right guard Harland Gunn -- was in the starting lineup. Shannon told our Susan Miller Degnan, during his private one-on-one interviews with reporters from each local paper, that the depth chart could change before Monday’s kickoff.

DEPTH CHART CHANGES: And apparently, the depth chart changed before UM’s Sports Information office even printed out copies and handed them to reporters before Shannon's press conference. According to the Palm Beach Post’s Jorge Milian, redshirt freshman Vaughn Telemaque – slated behind junior JoJo Nicholas – is actually the starter at safety alongside senior Randy Phillips. And redshirt freshman kicker Jake Wieclaw, who was entrusted to handle kickoffs according to the depth chart and teammates, really won’t be handling them just yet. Also of note according to the Palm Beach Post, Jake Byrne has passed Matt Perrelli in the walk-on battle for the third string quarterback job. 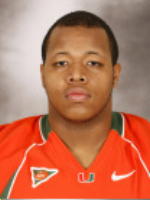 GUNN WINS STARTING JOB: Gunn may be the best story among players to win a starting job this fall. The 6-2, 315-pounder from Nebraska took over the job in the spring when Joel Figueroa had shoulder surgery and simply held onto the job when Figueroa – a four-game starter – returned for fall camp. Both should still end up rotating at the spot. But the fact Gunn did well enough to earn a starting job is a plus for the Canes.

Teammate Orlando Franklin said Thursday of Gunn: “He’s more mature, more patient. He’s always been a real good run blocker. In pass game in college you have to be patient because guys are fast and they’re just as strong as you. He improved with being patient and knowing what’s going to happen before it occurs.”

FRANKLIN CAN PLAY TACKLE: Miami’s offensive line has strength and depth in the interior. But at tackle consider the Canes thin. Shannon told our SMD neither redshirt freshman Ben Jones nor true freshman Jermaine Johnson are ready to see game action yet. So, it appears that if Jason Fox or Matt Pipho were to go down with an injury, Franklin would be the first player to slide outside.

“I play left guard, left tackle, right tackle. I take snaps everyday at both [tackle spots],” Franklin said. “I’m pretty sure that’s what would happen [if Fox or Pipho were injured]. Bottomline is I’d play any position they need me to.”

> Part of the reason the Canes could feel comfortable with Franklin at tackle is because freshman Brandon Washington can play anywhere inside. “Brandon is a real smart guy. For him to come in learn all three inside positions -- that’s crazy,” Franklin said. “I remember my freshman year. It was real hard for me just to learn left guard. You can put Brandon at left guard, right guard or center and you won’t miss a beat. He’s been doing a real good job.”

“He’s the leader at the wide out position. He’s the older guy. He works hard. He’s a different guy,” Phillips said. “He’s been lighting up things in practice. He always stays out there and gets things done. He has totally turned himself around. Hank worked his way into his starting position. A lot of the guys are way more than talented than him. But he got the job done. He’s a hell of a blocker. He runs precise routes, he’s catching the ball, doing the film room, doing all the little things right. He deserves it all.”

Hankerson may be starting, but I wouldn't take it to mean he's going to see more playing time than Johnson. This is the same team that started Khalil Jones in three of its first four games in 2008. I'm not saying Hankerson is like Jones, who caught just five passes last year. Hank is way better than Jones. My point is this football team has started guys in the past who weren't necessarily the best at their position. Shannon does it to send a message to the guys below them. Jones usually sat the bench after first two, three series. Hank will play more than that. But I still think when the game is on the line, Johnson will be in there.

JACORY'S FUNNY TAKE: I thought Jacory Harris’ days of providing comic relief and honest takes were over after his “enlightening interview” on Dan LeBatard’s radio show last month. But he came back strong Thursday when asked about playing on Monday night in front of a national TV audience.

“The only I thing I keep thinking about because its Monday night is if it’s the NFL,” Harris said. “I keep wondering if the man with the cowboy hat is going to come out and start signing on TV for us or something. It's going to be a fun experience for everybody."

> Harris said he wouldn’t necessarily play more cautiously this season after the transfers of Taylor Cook and Cannon Smith. But he isn't dumb either. "I know I won’t let it affect me because if I'm thinking `I can't get hurt,' I'm going to get hurt,” Harris said. “You got out and play timid, you have things you don't want happening happen. I'll take it as a regular game, have fun and let the team take care of me."

"If I see a linebacker running at me I think my first decision is to run him over. But I will be smart and take a slide. I’m not a dumb person. I know to take a slide when I have to. But if it’s to get extra yards, I may sacrifice my body.”

TWO-BACK COMMITTEE AGAIN: Despite saying on various occasions before the season he’d like for one running back to emerge as THE MAN, Shannon told reporters the backfield still belongs to Graig Cooper and Javarris James.

“I'm happy now,” Shannon said. “You can never have too many running backs because injuries always happen. We're happy with how Cooper and Javarris have been doing. They’ve always worked together. This is the best Javarris has ever done in camp since he was a freshman. He hasn’t been nicked. He's looks faster. Coop is Cooper, he's done a great job. And Lee Chambers has taken the next step. You go to the next group, Damien Berry, Mike James and Lamar Miller. A lot of guys are playing special teams, have some role against Florida State. When it comes down to it, Cooper and Javarris will be the two load guys and the other guys will play as needed.”