Morgan, Jackets are coming after Jacory

He's 6-4, 272 pounds and a nightmare for college football offensive linemen. Derrick Morgan has future first round pick written all over him and he'll be leading a Yellow Jackets defense that plans on coming hard after Canes quarterback Jacory Harris Thursday night. 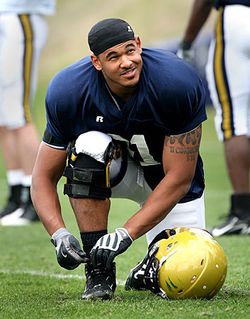 "He's a big guy, but he has a lot of speed to him," Canes left tackle Jason Fox said of Morgan. "He can speed rush you. He can go speed to power really quick. He has a lot of stuff. The big thing is he plays on both sides, so both tackles are going to have to be ready for him."

Morgan has five sacks in two games. Against Clemson last Thursday, he had a game-high 10 tackles, a personal-best four tackles for loss (13 yards), and three sacks. Other than Morgan, only Julian Burnett and Robert Hall have sacks this season — 1/2 each — for the Yellow Jackets.

Georgia Tech coaches told the Atlanta Journal Constitution this week their plan is to try and make Harris a lot more uncomfortable than he looked against Florida State. The Seminoles ran man-to-man coverage on the Hurricanes’ wide receivers and blitzed Harris frequently, but got to him just twice -- sacking him once and hitting him as he threw to cause an interception return for a score.

Tech defensive line coach Giff Smith told the AJC they hope to create some different looks for Harris and come after him with pressure from different points.

“We’ve put in some new defenses that’s going to get it stirred up,” middle linebacker Brad Jefferson told the AJC. “I think we’ll get some pressure on him and see what he can do with it.”

The Canes used several unbalanced lines (something brought from the NFL by new offensive coordinator Mark Whipple) to not only the run the football last week, but protect Harris. Fox lined up several times on the right side alongside fellow senior tackle Matt Pipho and tight end Richard Gordon, considered UM's best blocking tight end.

UM coach Randy Shannon said he thought his team did a pretty good job protecting Harris despite the various blitzes FSU used last week. "If you look at the offensive line you didn't see Jacory have to move out of the pocket," Harris said. "That comes from guys inside. They did a good job of protecting the middle. If you can push the pocket, you can get quarterbacks out of their rhythm. They did a good job solidifying the middle of the defense."

The issue for the Canes, however, will once again be depth. UM only played six linemen in their rotation last week -- Fox, left guard Orlando Franklin, center AJ Trump, Pipho and redshirt sophomore Harland Gunn and junior Joel Figueroa at right guard. 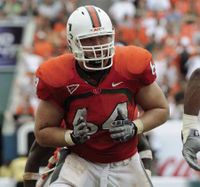 Last year, UM rotated eight players on their offensive line. So far, Fox said the team has been able to hack it because of the extra amount of reps they've been taking in practice. "To be honest with you, I didn't feel that gassed," Fox said. "There was only one drive where I was hurting."

Nobody, however, could end up hurting the Canes more Thursday than Morgan.

Fox said he's been looking forward to the matchup about as much as Morgan has. During ACC Kickoff media days in Greensboro, the two players advanced through a video game tournament of NCAA Football 2010. Fox, using the Canes, scored twice late in the game to beat Morgan, who was playing as Georgia Tech. It’s still a sore spot for Morgan.

“He kind of got lucky playing in the game,” Morgan told the AJC. “It’s time to get revenge this week.”

> NO SWINE FLU HERE: UM coach Randy Shannon was asked during Wednesday's ACC Teleconference if any of the three players who came down with illnesses this week and are either listed as doubtful (RB Damien Berry, OL Ben Jones) or out (S Jojo Nicolas) for the game have the swine flu. “We don’t have anything," Shannon said. "Just the guys on the injury report. That’s all we have.”

> RAY RAY UPDATE: Shannon said highly touted freshman Ray Ray Armstrong has done a good job learning through camp and he's expecting big things in the future. When that future is, we aren't sure. But teammate Brandon Harris said he doesn't think it will be long before Armstrong and fellow freshman cornerback Brandon McGee are on the field more often.

"I think Brandon McGee and Ray Ray are the two freshmen closest to having the most impact on us this season," Harris said. "McGee, he'll have a chance to play a lot because the depth at corner is not the best depth. Ray Ray is going to be a great football player. He has all the tools. Once, he gets the mental part down. He'll be great for us. Ray Ray is more of a strong safety. His big frame, he tackles very well. In this game, he's going to get a lot of play."