Long day for me at the office filming videos for our high school football and college football show. It hasn't allowed me to post what I gathered today out at UM. I'll post a real blog later tonight as well as audio.

Ffor now, here is some of what Randy Shannon and Jacory Harris were talking about during the weekly pregame press conference inside the Edgerrin James room. 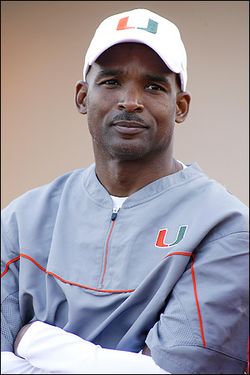 > Shannon said it will be good to get defensive end Eric Moncur back this week. "He practiced well yesterday and today,' Shannon said. We’re excited about his progress, and he should be ready for the game."

> One decision that hasn't been made yet is who will handle kickoffs this week. Walk-on Alex Uribe, however, could end up beating out redshirt freshman Jake Wieclaw. "We haven’t made a decision yet," Shannon said. "We probably will do that either tomorrow or maybe at game time."

> Shannon said the biggest thing for his team's mental status is to not let the win against Florida State get them too high. But as far as on the field, Shannon said the biggest key will obviously be stopping the triple option. "They have about four or five different scenarios on how they will run it," Shannon said. "The biggest factor will be [Jonathan] Dwyer. The fullback must be accounted for on every single play. If he happens to get into the open field, we have to get him down for a 10 or 12 yard gain and then line up again. We cannot afford him to get long runs against us and that’s what makes their offense go."

> Shannon praised the play of Yellow Jackets defensive end Derrick Morgan, whom Shannon said looks like he doesn’t get tired. "He does a great job of pressuring the pocket and playing real hard," Shannon said.

> Shannon said the Canes have been working on improving their tackling since the summer time and should be ready for what Georgia Tech runs at them -- including cut blocks. "Some say you don’t want to get hurt in practice, but we work full speed on it and they know they’re going to be cut," Shannon said. "t’s like muscle memory. If you’re always getting cut in practice, then in the game you can push the guy down and go chase the football. No one has gotten hurt and we haven’t even had lower pads on. There are no excuses for getting cut, because then you’re not doing what is being taught to avoid it." 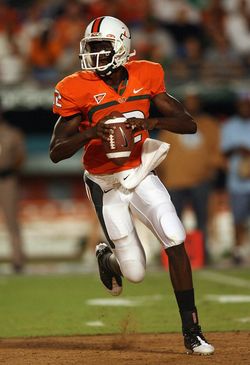 > Quarterback Jacory Harris said a big key for UM will be scoring early and putting Georgia Tech in the position to have to throw the ball. "These first two games they haven't really been behind, they have always been in a comfortable lead so they can try new things," Harris said. "It helps them. That's the type of team it is. If you're just running (the ball) every play, sooner or later you're going to get tired. The fourth quarter is when we scored the most points last week. We're going to have to step it up through all four quarters, make sure we score points."

> Harris reiterated his arm feels fine -- even after the shot he took at FSU. "During the game, I didn't get the feeling back (in my fingers), but I had to play with it, (The next day ) it was still the same. I guess it was my funny bone, a nerve. Things were kind of numb. But I'm alright (now)."

> Since the win over the Noles, Harris said he's been a popular man on campus with more and more students approaching him between classes. His phone has been blowing up too. "Gino Torretta, Ken Dorsey, William Joseph, Santana Moss texted me," Harris said. "Torretta and Dorsey congratulated me, told me to keep the team focused, make sure we don't get bigheaded, keep this thing going. Everyone wants us to bring the “U” back on top to glory days, and that's something we're trying to do."