Randy Shannon said he didn't spend any time watching Georgia Tech as it held off Clemson Thursday night. "We will have a lot of film to watch when it comes in today or tomorrow, so we will be watching the next three or four days," Shannon said. "You can't really see anything on TV copy. When you get the game copy you can see everything." 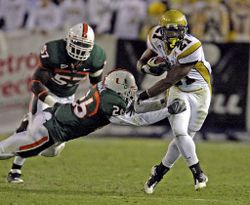 Truth be told, the Hurricanes probably could have skipped Thursday night's ESPN telecast, gone to bed early to get a few hours of rest before Friday morning's practice and been just fine because they've been studying what the Yellow Jackets do with their triple option attack for a long time. How long? Since right around the time Georgia Tech was done carving up the Canes last November for 472 yards (2nd most allowed by the Canes in school history).

"We looked at Georgia Tech tape in the spring, watched them in the summer time," defensive line coach Clint Hurtt said. "It's one of those offenses you can't do anything to simulate it. Every look or illustration has to be perfect as to how you are going to defend it. You have to spend your time on it."

Hurtt said the Canes watched Thursday night's game and took mental notes from the type of success Clemson was able to have. Despite giving up 304 yards total on the ground, Hurtt said the Tigers were able to slow down a big part of the triple option attack -- reigning ACC Player of the Year Jonathan Dwyer, who finished with 66 yards on 18 carries. Dwyer, who collects most of his yards on the dive play, was often met at the line by Clemson's dominating defensive tackles. Hurtt and coach Randy Shannon both said the play of UM's tackles this week will be huge.

"It comes down to the defensive tackles, who have to get a lot pressure, and a lot of push up the middle with what we call the hump," Shannon said. "If you can get the quarterback to hump backwards it screws up the pitch and fullback relationships. If you don't get the quarterback to make the hump, then it is going to be a long night. That is why those guys inside are so valuable."

Said Hurtt: "You have to take out Dwyer. The thing that gave Clemson a shot last night was that they took Jonathan Dwyer out of the game. He's an extremely talented back... he's the best back in the country in my opinion -- between he and and the kid at Cal [Jahvid Best]. We have to be able to stop that kid."

Of course, there's also the task of stopping the "other guys." Clemson had a hard time doing that Thursday as quarterback Josh Nesbitt piled up 91 yards -- most on the game-tying field goal drive. Louisville transfer Anthony Allen, the pitch man, collected 127 yards (most on a long touchdown run). All of that comes back to assignment football, which the Hurricanes were miserable in doing last year.

Hurtt said focus in the film room last year was "nowhere near what it needed to be." But he said film study for Georgia Tech has been intense since the Canes were beat down. He said Miami's young defensive players have been coming in on their own time to prepare over the past few weeks.

Hurtt said one major problem last season was the fact UM's linemen were lined up too far away from the football. It led to linemen being cut down on chop blocks, and Georgia Tech's offensive linemen were penetrating Miami's second tier defense (it's linebackers) to open big holes. At different times throughout the year Hurtt said he's put on tape from last year's game during film sessions to remind UM's defense just how bad they looked.

"It's a good learning experience for them to be able to see and understand this is what happens to you when you don't do your job," Hurtt said. "It's good that they see that. It burns them, ticks them off a little bit. But that's good. It should be like that."

Hurtt said Miami's defensive line issues (lining up too far away from the ball) have been dealt with and that new defensive coordinator John Lovett's game plan is "a lot easier" for players to digest.

"Coach Lovett is an expert at putting an effective defense to stop that offense,'' linebacker Darryl Sharpton said. "He's added a couple new wrinkles, techniques, alignment, different ways to defend it. We have a different defensive way to approach it."

"In 2001, we had to prepare for Nebraska and we used Roscoe Parrish as Eric Crouch," Hurtt said. "If you can tackle Kendall Thompkins, you can tackle anybody becuase Kendall is every bit as elusive as Roscoe."

> One thing the Hurricanes have in their favor this year is the return of some key personnel who missed last year's game: Safeties Randy Phillips and Vaughn Telemaque, linebacker Colin McCarthy and defensive end Eric Moncur. Moncur, who is coming back from a groin injury, practiced again Friday. Hurtt said Moncur's return this week will all depend on "how good he feels."

> Hurtt said the Canes definitely missed Adewale Ojomo and Moncur against Florida State. "You miss Adewale for his energy, his playmaking ability, the passion he brings to the field. That's not just the defensive line. We miss that as a team. It's a different dimension, he's a different kind of guy," Hurtt said. "Same thing with Eric. His leadership, his experience, those things are invaluable."

> Hurtt said he saw a lot of good things from junior Allen Bailey in his first start at defensive tackle, but also some bad. "He had a couple opportunities in the fourth quarter -- on the long runs they got -- where he could have shed the block and had back-to-back [tackles for loss]," Hurtt said. "The thing for him and the rest of our guys is to shift off blocks faster, convert to the pass rush faster."

> Hurtt said he was surprised with how poorly sophomore Marcus Forston played considering he had been "dialing it up" in practice. "If I had to say there was one thing that was a strength for us in training camp it was rushing the passer," Hurtt said. "We did an outstanding job getting off the edges, putting pressure on the quarterbacks in practice. We get into the game and we did a lot of good things in the running game, but the pass rush lacked. That's something I know we'll get better at."

> Receiver Aldarius Johnson and cornerback Demarcus Van Dyke were both in street clothes at Friday's practice and did not participate.

> For the complete audio interviews with Coach Shannon and Hurtt visit our UM audio page.