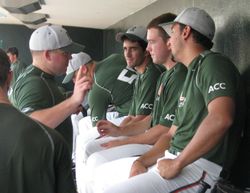 The other reason for his glee? The start of fall baseball. "I enjoy what I do," Morris said. "My job is also my hobby."

His job this fall will be to try and find answers to some of the big questions facing his team. Among the biggest ones according to Morris:

> Which of the 13 new faces on the roster will be able to help the Canes right away?

"We have a lot of question marks," Morris said. "We have some good young players. It's very important this fall to figure out where we need to be by February."

Not long after UM completed it's 38-22 season with a loss to Florida at the NCAA Regional in Gainesville, Morris admitted to reporters the Hurricanes suffered from chemistry woes in 2009. He believes the 35 players on his roster -- six seniors, five juniors, 11 sophmores, and 13 freshmen -- will be a better mix in 2010.

"The team at this point has a very good attitude, but it's very easy to have a good attitude right now when everyone's playing, doing the same thing," Morris said. "We just finished going through a tough boot camp. If we can run our program like the Marines, I would love to be able to do that, because when those guys come out of boot camp they'll take a bullet for each other. We just went through the hardest boot camp since I've been at Miami, I can tell you that."

Said Lawson: "We've never been through an offseason so tough. We've been having to get up at 5:30 in the morning everyday, running every day. Then we run at 4 p.m. every day in 100 [degree heat]. . Everyday you have to come out with the same attitude and get better."

WHO WILL CLOSE? Morris would love to figure that out by the end of the fall and joked he'd "trade two starting pitchers for one closer because it's such a tough role." But he said Thursday, the answer won't really come until February when guys are thrown into the fire.

"It's wide open right now," pitching coach J.D. Arteaga said. "Some of the veteran guys -- David Guiterrez -- is one we're thinking about. Hopefully, Taylor Wulf gets back to where he was last year. He has a chance to be a guy there as well."

PLENTY OF ARMS AVAILABLE... The unsure closer situation aside, it's pretty clear the Canes' strength entering the season will be pitching. The staff returns 84 percent of its innings pitched from last season (446 of 531).

"Having [Eric] Erickson back, Chris [Hernandez] back and some of the freshmen coming in I think we'll have a pretty good rotation in the spring," catcher Yasmani Grandal said. "I think for the first time ever we could have a five lefty rotation. I think we have a strong pitching staff. I think we'll be real good by the end of the season."

In all, UM will have eight left-handed arms available and seven righties. The two locks for the starting rotation are lefties Chris Hernandez, who promises he's ready to bounce back from his sophomore slump (7-5, 4.76 ERA, 93 Ks, 31 BBs), and junior Eric Erickson, who returns after missing the 2009 season rehabilitating from an injury.

"Erickson is doing great," Arteaga said. "He's throwing bullpens every other day. Now the bullpens are getting longer so he's throwing every Monday and Friday. He's not going to be stretched out like the other pitchers this fall. But so far he's had no setbacks. He's more than a year out of surgery and 100 percent. He's throwing breaking balls and everything else."

Arteaga will not be giving Hernandez any time off this fall like he did a year ago. Arteaga admitted the 2008 Freshman All-American "just never looked or felt comfortable last year" and took full blame for it. "He just never was really ready to go in the spring," Arteaga said. "He never got into a rhythm. He took the summer off like all our pitchers did this year. Hopefully, with good hard work in the fall, it will carry onto the spring."

Only one arm -- sophmore right-hander Travis Miller (coming off minor surgery for a nerve injury) will not be throwing this fall. Arteaga said Miller was cleared to begin lifting weights Thursday and likely won't begin throwing until December. "If he's not ready for opening day, he'll be ready for week two or three," Arteaga said.

The two freshmen likely to provide an instant boost is local right-hander E.J. Encinosa (Miami Coral Park) and left-hander Jerad Grundy, the only player not from Florida who is among the 13 players in UM's ninth-ranked recruiting class according to Collegiate Baseball.

FAST ADDITIONS... The consensus thought on the position players brought into help replace the losses of Chris Hermann, Jason Hagerty, Dave DiNatale and Ryan Jackson is that there's a lot of speed and maybe not enough pop. 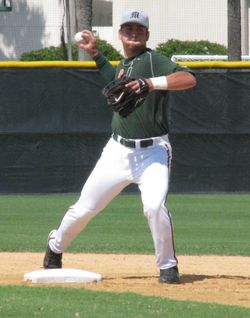 "This is a very athletic class," Arteaga described. "We have a lot of guys that run below a 6.7, 6.8. So that gives us a lot of options to run and put pressure on other teams. Not a whole lot of power in the class, but a whole lot of speed. The next class will have a little more weight behind it in terms of power. But our goal was to get some athletes that could play multiple positions and put some pressure on teams."

In all, UM brought in five infielders and two outfielders among position players.

Former Gulliver shorstop Stephen Perez, a switch hitter, is the most highly touted having been drafted in the 18th round by the Cincinnati Reds. Perez can play shortstop. Junior Chris Pelaez, who signed with Louisville out of high school, is a 6-1, 205-pound junior outfielder and left-handed bat that could win a job. Ditto for sophomore infielder Rony Rodriguez, a 5-11, 200-pound sophomore who played at Miami-Dade College with Pelaez.

"We just have to be solid one through nine and do all the little things this year," Lawson said. "Last year it seemed like if the top of the order was hot, the bottom of the order was off. Or vice versa. We didn't do a lot of the little things right. We didn't steal enough bases. It seems like this year, it feels like we got 10 people that can [run fast]. We better be able to steal a lot of bases and score a lot of runs. I think we're going to be real scrappy this year and put a lot of pressure on the defense."

... We now will return you to your regularly scheduled football blogs as the Canes prepare to take on UCF Saturday night in Orlando...