It's time to preview tonight's game as the ninth-ranked Canes (4-1) venture to Orlando to take on UCF (3-2) at a sold out Bright House Networks Stadium.

REWIND: UM hung on to beat the Knights 20-14 last year at Land Shark Stadium in a game that was just flat out ugly. Both offenses were a mess. It took a Darryl Sharpton batted pass inside the UM 40 late in the game for the Canes to preserve the victory. 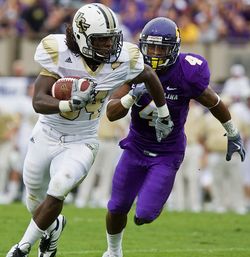 FAST FORWARD
> UM wins because... They have superior talent and play like it. The Knights might be playing at home and have a loud crowd backing them, but UM has played in tough settings before. The fact last year's game was so close has motivated the Canes this week to play much better than last year. On paper, Jacory Harris and his receivers -- LaRon Byrd, Travis Benjamin and Leonard Hankerson -- are going to be much better than anything the UCF secondary has seen before. The Knights rank 95th in pass defense and give up tons of long passing plays. And frankly, the Knights aren't very good on offense, ranking 83rd in rushing and 84th in passing. While there are a few big play threats, most of UCF's scores come on long scoring drives. UM's defense is banged up, but still has enough athletes to get to quarterback Brett Hodges, who takes sacks and throws interceptions (6).

> UCF wins because... The Knights jump out to an early lead, cause turnovers, make big plays on special teams and run the football successfully with Brynn Harvey. The 6-1, 205-poound sophomore broke out with a 219-yard performance against Memphis last week and ranks 16th nationally in rushing. He can be a load to bring down at times and will have the advantage of facing a UM defense short Jordan Futch (its fourth linebacker) and a banged up defensive line. Harvey will be key, but so will the play of the Knights special teams, which ranks second in the nation in punt coverage and ninth in kickoff return yardage against. UCF has had three different players return a kickoff for at least 72 yards in five games.

> My pick: UM 30, UCF 16. This isn't going to be a cake walk for the Canes. The Knights are 11-5 all-time at home and have played ranked teams tough in their backyard, losing to sixth-ranked Texas 35-32 in Sept. 2007 and 17th-ranked USF 31-24 Sept. 2008. Their biggest loss at home was a 15-0 defeat to UAB last year. Still, I can't see the Canes losing this one just because UCF's offense isn't that great. The difference will ultimately be Miami's explosiveness at receiver. There are just going to be too many weapons for UCF's defense to try and stop.

GAME BALLS
> Offense: Jacory Harris. Not really going out on a limb here. But considering Jacory has thrown as many picks (5) as he has touchdowns the past three games, I get the sense he's really motivated to provide pinpoint accuracy in today's game. He's going to feel the heat from UCF's pass rush, especially with the Canes short on offensive lineman (Joel Figueroa likely won't play). But Harris will make the plays he has to in the end for Miami to do enough and win this game without a ton of excitement in the fourth quarter.

> Defense: Marcus Robinson. UM is shorthanded on the defensive line and needs someone to step up and have a big day. Robinson has been steady with three sacks so far. With former Miami Southridge teammate Cliff McCray lining up near Robinson at right guard, I expect him to have a little extra motivation and have a breakout day getting to the quarterback.

> Special teams: Arthur Brown. UM coach Randy Shannon said the loss of Jordan Futch on kickoff returns was huge. Look for Brown to replace him and provide a few big hits and blocks on special teams.