In case you missed WQAM's Thursday night edition of Hurricane Hotline, UM coach Randy Shannon was rather candid on a few subjects -- including his philosophy on personnel changes following injuries: 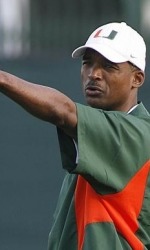 "When [receiver] Aldarius [Johnson] got hurt [against FAMU]. What did we do? All we did was put in [Leonard] Hankerson and move Travis [Benjamin] up. LaRon [Byrd] was playing one side and Travis was the other guy. Hank was the swing guy. When [tight end Dedrick] Epps didn't play. OK, [fullback] Tervaris Johnson moves up. The next best guy was Jimmy Graham. You always bring up the next best guy to get things done."

Shannon said one aspect that is severely affected by injuries is special teams play. He said the loss of linebacker Jordan Futch to a season-ending torn anterior cruciate ligament in his right knee was crippling to the kickoff return team.

"You have to change a lot of things when you start getting injuries," Shannon said. "A lot of people don't think Jordan Futch is valuable. Jordan Futch was very valuable to us. He was our best kickoff guy. He was our great kickoff return guy in terms of making the key blocks on their best person. He was doing a great job. A lot of those runs [Graig] Cooper was breaking, Mike James was breaking was because of Jordan Futch. When those injuries come, you have to keep moving guys around to get the special teams in order. That's key. Somebody has to step up to fill that void. We have players to do it. Now, we have to coach them up. And they have to do it."

Here are some other topics Shannon was talking about:

> On the eight season-ending injuries and the fact UM will still have to rely on several true freshmen to play valuable minutes this season: "[The depth isn't where we want it to be] I said that at the beginning of the season, we talked, we still have a lot holes to fix as far as depth on this football team. Everybody wants to say we're back. We're doing a great job. This football team is doing a great job. But when you're playing a true freshman like Curtis Porter that means we're not back. We have to keep recruiting."

> On why UM may not be recruiting certain highly rated players from Dade, Broward and Palm Beach: "We're going to recruit players that fit our program. Some players we will not recruit at Miami. Maybe it's academics. Maybe it's something we know that other people don't know. We're going to make sure whoever we recruit will be a great football player, a great athlete, very academically sound, wants to graduate and get their degree."

> On the status of injured fullback Patrick Hill, whom Shannon said suffered a high ankle sprain: "It really takes a long time to get back. He's been working hard."

> On why redshirt freshman defensive tackle Jeremy Lewis isn't playing: "He's working in practice, trying to get himself in the mix. The one thing about it is he has competition and has to get better. He has to get better to make us a better football team."

> On why freshman defensive tackle Curtis Porter is playing: "He's been coming along pretty well. He came in nicked up on the defensive line and he caused a little havoc. He's a big time run stopper. We're enthused with the way he's coming in."

> On what he likes about freshman cornerback Brandon McGee: "We like the big corners with speed. If you can get anybody who is 6-1 with speed, that's good. He's another January guy. He got nicked in the spring time. We had to sit him out the last two weeks of spring. The more he keeps practicing well, the more playing time he'll get."

> On when highly touted sophomore linebacker Arthur Brown might play: "Arthur Brown is getting better each week. But it's like anything, when he's ready to play, he will play. We have a lot of football players on this football team that were highly recruited, highly rated. But it's always going to be a learning process. When guys are ready mentally to get it done, they will get it done."

> On how receiver Tommy Streeter performed in the first real action of his career against FAMU last week: "He made a big time block when Thearon Collier scored a touchdown. His special teams play was big because guys were nicked last. We even had Tommy run down on kickoffs and he made a couple tackles."

> On why receiver Davon Johnson isn't playing: "He's working. Right now, he's not in the top five guys. We're going to play five guys and not play eight. We're going to concentrate on those guys getting the reps."

> On if running back Damien Berry might see action in the backfield against UCF: "I can guarantee he'll be on special teams for us."

Haith, who helped coach the United States in the World University Games this summer in Serbia, told Hurricanes Hotline Thursday: "This is the most talented team we've had from top to bottom. We have length on the perimeter. It's our job not to mess them up.

UM's version of Midnight Madness -- the second annual Hurricanes Hoopfest -- will take place from 7 to 9 p.m. on Wednesday. Fans will be able to watch the men and women scrimmage for 30 minutes and interest with players during an autograph session as well as pick their seats for the upcoming season.

UM will host an exhibition game versus Florida Southern on Nov. 9 at 7:30 p.m. and open the regular season at home versus North Carolina Central Nov. 14 at 4 p.m.

RING OF HONOR LUNCHEON... Plenty of seats are still available for the luncheon to honor Bennie Blades, Steve Walsh and the late Eddie, Dunn, who will be inducted in UM's Ring of Honor during the Clemson game. Sponsor tables can be purchased for $1,5000 and tickets can be bought individually for $100 per person. Call UM's Hurricane Club at 305-284-6699 if you are interested.