ORLANDO -- About to head back out on the road and head home. Here are some of my thoughts on UM's 27-7 win over the UCF Knights:

> This definitely wasn't the Canes finest effort. But I think it says something when U can don't necessarily play at your best and still win rather comfortably. We can point to all the what-ifs... like what-if UCF had scored a touchdown midway through the third quarter when it had the ball at the UM 2 to start or what-if the Knights hadn't missed that field goal in the first quarter. The bottomline: UM was clearly the better team and more the plays when it had to. Give the Canes credit -- especially on defense. 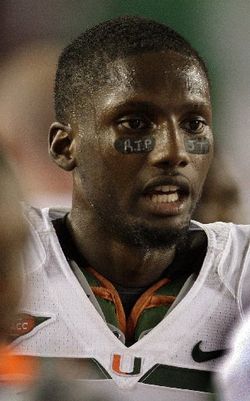 > GAME BALL -- OFFENSE: Quarterback Jacory Harris made one bad decision, throwing a deep ball into double coverage to Tommy Streeter that was eventually batted away. But aside from that, Harris was spot on despite getting some really poor pass protection. He finished 20-for-26 for 293 yards and a touchdown. I can't even really remember the other five incompletions because it felt like every pass he threw was on the money. It was good to see considering he threw five interceptions in his previous three games combined.

> GAME BALL -- DEFENSE: Everybody. Miami's defense is getting better. I know they're shorthanded and they were playing against a rather average to below average UCF offense. But guys are getting better.
- How about Jared Campbell? He caused Colin McCarthy's huge third quarter interception, but he also batted away two passes including a deep ball that could have gone for six.
- Sean Spence is no longer getting pushed around. He was all over the field with seven tackles and two huge sacks.
- Darryl Sharpton had 11 tackles -- one shy of his career high -- including eight in the first half. He looked like a real run stopper.
- And how about DeMarcus Van Dyke? Huge hit in the backfield on running back Brynn Harvey on first and goal at the 2 and then he was there to defend a pass at the 2-yard line.

> EMERGING: Damien Berry might be UM's best running back. Last week, I was urging the kid to ask for more playing time. He got it because he earned it -- and because Graig Cooper and Mike James are hurt. Still, give Berry credit. He went out and ran again with a full head of steam, helping UM's stagnant running game get going with 14 carries for 60 yards. Javarris James, who moved to seventh on UM's all-time rushing list, said Berry has always been this tough a runner. I'll say it now without the smirk: Give Berry the dang ball!

> NEEDS WORK: After giving up six sacks, UM has a lot of work to do in pass protection, namely with the guy starting at right tackle Matt Pipho. UM coach Randy Shannon was quick to defend his offensive line, saying Jacory might have been hanging onto the ball too long or receivers weren't running the right routes. I'm sorry, but when you have to roll your quarterback out so he can throw the football, you aren't doing a good job protecting him. Nearly all of Jacory's sacks happened in 3-4 seconds or less, usually when UCF blitzes weren't picked up. That should be chalked up to pass protection.

> HELMET STICKERS: Walk-on Corey Nelms for his huge hit on a kickoff return; tight end Jimmy Graham for his two tough catches that didn't go for touchdowns; kicker Alex Uribe for his three tackles on kickoff returns (Matt Bosher isn't the only kicker who can bring guys down).