University of Miami coach Randy Shannon has always said he doesn't buy into early commitments if players continue to take visits to other schools. He's compared it to be engaged to one woman while dating another. If that's the case, Jacksonville Raines defensive tackle Louis Nix (6-3, 318) just dumped UM for Notre Dame. 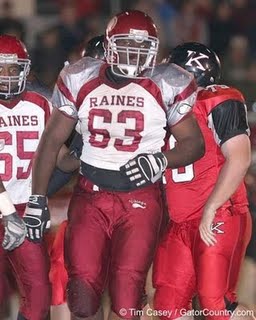 Nix, considered an ESPN Top 150 recruit and the seventh best defensive tackle in the country, had been flirting with the Irish since he first gave UM a "commitment" a year ago. He attended one of Notre Dame's summer camps in June and officially visited for its game against Michigan State in September. Then, he followed up with an unofficial visit for the USC game in mid-October.

Raines coach Deran Wiley said Wednesday morning he thinks Nix "won't be going back to the Canes" and is "really done with recruiting." Raines teammate Tavadis Glenn, a 6-5, 297-pound lineman, is still committed to UM. Wiley has said he thinks Glenn, who could end up playing on either side at UM, will stick to his word.

"Louis was a shock to me," Wiley said. "But I guess that's part of the recruiting world. To be honest with you, it's going to be boom or bust. I guess it's something totally different than what he's been around. As his coach, I have to support him."

Lemonier's coach Mark Berman said Wednesday morning the Hurricanes were in the top four for Lemonier along with Tennessee, Auburn and Florida State. Lemonier will take his final visit this weekend to LSU. "To be honest, UM has always been part of the mix," Berman said. "They are one of his top five and they're definitely in the mix. I don't think Nix decommitting will entice him more. Corey does his homework and that will play a role in his decision. Corey is a young man who is very smart, very loyal and committed. If he makes a decision at any point he'll be firm in that decision. He wants to be firm. I think there could be a possibility after the holidays he could make a decision."

> The Canes are down to 23 commitments in their class. Last week, they lost Glades Central safety/receiver Greg Dent to Florida State. UM recruiting coordinator Clint Hurtt said in September the Hurricanes were looking to sign between 23-25 players in its next class.