ORLANDO -- Playing in a non-Bowl Championship Series bowl game a four-hour drive away from home in December might not be where the University of Miami wanted to be at the end of this season. 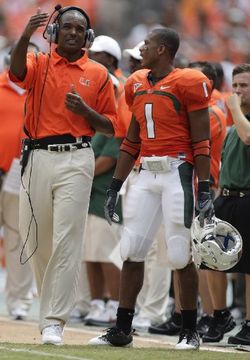 But with a win in Tuesday's Champs Sports Bowl over Wisconsin, the Canes will likely be exactly where their fans have wanted them to get back to for the second half of this decade: in the hunt for a national title. That's the carrot coach Randy Shannon has been holding out to his players this week. And he talked about it plenty Monday afternoon in his final press conference before Tuesday's game.

"If you go into the end of the season and you win your last game, your going into spring football with some excitement, a lot of enthusiasm," Shannon said. "For us, for Wisconsin, 10 wins can put you probably into the Top 10, Top 12 at the end of the season. If you're returning a lot of guys the following season, they'll probably put you into the top six, top seven in the country. Now, it's not a situation where you're starting outside of the Top 25 and bouncing in or bouncing out. It's a situation where you really get your season going from the start."

The Hurricanes (9-3) haven't won 10 games in a season since 2003. The last time they started a season ranked in the Top 25 was in 2006. The last time they began a season in the Top 10 was in 2005 when they debuted at No. 9 and lost at Florida State 10-7. Barring a change in schedule, the Hurricanes will likely open the 2010 season against Florida A&M at home on Sept. 4. The following week, a trip to Big Ten champion Ohio State and a showdown between two potential Top 10 ranked teams looms. With a win in Columbus, the Canes could potentially put themselves on the inside track for one of the Top 2 BCS spots.

"Winning the bowl game is huge," cornerback Brandon Harris said Sunday. "We know it puts us in the Top 10 coming back next year. That's something we're really looking forward to because we feel like next year is our year to win a national championship. It all really starts with this game right here."

> One thing Shannon talked about Monday was the growth and maturity of his team. A year ago, UM was 7-3 and in the hunt for the ACC title when the Canes (with 22 freshmen in the 2-deep) wilted. He compared it to 7th graders having to take on seniors in high school and not having the stamina to stay up for the entire fight. Monday, he talked about how new coordinators Mark Whipple and John Lovett played roles in helping the Canes grow.

"Our whole football team were freshmen in spring football because they had to learn a whole new offense, totally new defense," Shannon said. "When you have two coordinators coming in, grinding, making sure guys understand what they have to do offensively and defensively, you have to see how players respond to it. We didn't just come out do things the right way. It took us probably on offense until the sixth game of the season for the receivers to run the correct routes, day in and day out. It took us five or six games for the offensive line to get in tune with how many steps we wanted to get down.

"Defensively, we had a lot of injuries at the start. We could have faltered, we could have went backward. But that's the maturity of the football team. That's the maturity of guys understanding we've been there before. That's when true freshman Ray Ray Armstrong came alive. Ray Buchanon, a true sophomore, came around. Curtis Porter. When you're coaching [well], you have guys being productive you're not expecting to come in and produce. True freshman Olivier Vernon is another one. Their play shows you how the coaches are doing a good job. You look at Mike James, being our third tailback, but becomes our fullback. That's a true freshman getting it done. That's what I think coaching is. It's teaching. If you can teach, you can coach. That's the success we've had with Coach Lovett and Coach Whipple."

> Shannon was asked about the reaction his players had when they saw the movie The U a few weeks back. "It's a TV show, a production and you move on," Shannon said. "It can't affect what you do in this time in age. The big picture is what we're doing now, what we're doing on and off the field. You see the improvement on the field, the 100 percent graduation rate. There's a lot of good things going on at the University of Miami.

"To be honest with you, the 30-for-30 helped. We had a lot of parents call in, players we weren't recruiting want to be a part of the University of Miami. But we have to recruit the right type of players that do the things we do, that have the right type of passion for the game and a team mentality, not an individual mentality."