Is UM fading down the recruiting stretch?

I got to enjoy a few days off after the Orange Bowl last week and took comfort in the fact there probably wouldn't be much Canes news outside of what Frank Haith's basketball team would do Saturday night against Wake Forest in a big ACC showdown.

It was definitely a good win for the Canes, who needed a big win to hang their hat on after going 14-1 against what was ranked the 313th best non-conference schedule. But as much as I want to keep focus on Canes hoops, the disturbing trend of emails I've been receiving lately concerning what U perceive as UM fading down the recruiting stretch warrants conversation. 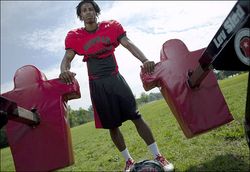 Sunday night, UM lost yet another commitment from its 2010 class when Javarie Johnson of Dunbar High in Washington -- considered the Canes' top linebacker -- switched from UM to Maryland. According to several recruiting websites, Johnson's coaches said he wanted to stay closer to home.  Canesport.com reported Johnson scored below an 820 on his SAT, which is the athlete requirement for admission to UM. Either way, Johnson became the third highly-rated recruit to drop off UM's commitment list since December, joining Miami Northwestern defensive tackle Todd Chandler (now headed to USF) and Jacksonville's Louis Nix (bound for Notre Dame)

Losing "commitments" is never good, especially those considered highly ranked. But it happens in recruiting. So you probably shouldn't be stunned or feel like the Canes' recruiting efforts are crumbling to the ground when it happens.

The real cause for concern will be if UM doesn't close strong come Feb. 3. Right now, most recruiting analysts would tell you this UM class being put together after a 9-3 season and bowl loss to Wisconsin is average at best, and certainly not anywhere near the top of any national rankings. UM has met needs. There are seven offensive linemen (St. Thomas Aquinas tackle Brandon Linder, Malcolme Bunche and Shane McDermott are solid), four linebackers (Gainesville Kevin Nelson is impressive), four cornerbacks (none highly regarded), three running backs (Storm Johnson and Eduardo Clements are considered high-end), two tight ends (JUCO signee Chase Ford should help right away), a quarterback, a safety, a defensive end and a receiver.

But where critics say UM has failed is nabbing the stars in their own backyard. And they -- the critics -- would be right. The 2010 class in South Florida was considered one of the best in the country (as usual). Yet, when you look over the top names from Palm Beach south all the way to Homestead, there aren't many who will be heading to Coral Gables in a few months to continue their football careers.

Look at the Top 40 players from South Florida according to Rivals.com and see where they are headed or what schools they are considering. I bolded the future Canes to make them easier to find...

There were a few other Canes sprinkled in the Rivals 100 for Florida from other parts of the state: OT Tavadis Glenn from Jacksonville Parker was sandwiched in between Meline and Ash in the state rankings at No. 44; RB Darion Hall from Naples Lely is ranked 75th, right after Fashaw. Gainesville LB Kevin Nelson follows at 77, Fort Myers High CB Jeremy Davis is ranked 78th, OL Jonathan Feliciano from Davie Western is listed 92nd and QB Stephen Morris from Monsignor Pace is 93rd.

Rankings and stars aren't everything. But the fact remains there is a lot of talent in UM's backyard heading to other place (namely pretty good football programs). Randy Shannon and his staff could make up for it with some excellent evaluation work and coaching, getting under the radar guys, making them better players and superstars. And they still have plenty of other high-end recruits (No. 1 OL Seantrel Henderson, Lemonier, McCartney, LB Christian Jones, TE Christian Thomas) at least reportedly interested in giving the program a look with visits.

But here's my advice: Keep your fingers crossed and hope the guys Shannon hired to restock his program with talent are a lot better at this than Rivals.

> In case you were wondering... Last year, the Canes nabbed RB Lamar Miller, DB Brandon McGee, DL Luther Robinson and DL Olivier Vernon among the Top 12 South Florida prospects according to Rivals. Among the state's Top 100 recruits, UM signed No. 2 overall player and safety Ray Ray Armstrong, No. 33 prospect in defensive end Dyron Dye, No. 39 prospect in cornerback Jamal Reid, No. 43 prospect in RB Mike James and No. 92 prospect in OL Cory White.