Northwestern coach: "There is no rift with UM"

Miami Northwestern, the elite high school football program in Miami-Dade County, has long been a pipeline to the University of Miami. And despite what other "sources" may be saying, Bulls coach Billy Rolle, a longtime friend of Hurricanes coach Randy Shannon, told me Wednesday afternoon that won't be changing. 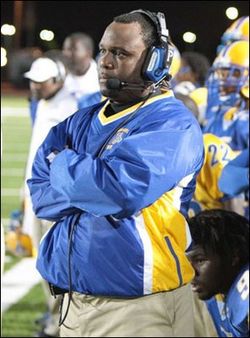 "This thing is plain and simple: it's a big misunderstanding," said Rolle regarding reports that say a rift has been created between the Canes and its biggest feeder school. "I don't have any problem with the University of Miami, no matter what anybody might think or say. No one here does. The recruiting process is the recruiting process and sometimes kids don't know what it's about. They don't know it's a business. And some of our guys had to learn that, the hard way."

Rolle is of course referring in part to the recruiting saga of highly-touted defensive tackle Todd Chandler, who committed to Miami as a junior (right after the Bulls won the mythical national title with Jacory Harris and seven other future Canes in 2008) but is no longer a Canes recruit.

Tuesday, ESPN.com ran an article, quoting Chandler (as I did back in December) voicing his frustration with the Hurricanes and his understanding that he once had a scholarship offer from Miami, but had it taken away." The article also quoted Terrence Craig (as a Northwestern assistant) saying "the people in the community here at Northwestern won't forget this." Other news outlets later quoted sources saying a rift between UM and Northwestern had grown so big, the Bulls wouldn't send future players to UM until Shannon and Rolle resolved the issue.

According to Billy Rolle, all of it is hogwash. Craig, he says, wasn't even a part of his staff this year at Northwestern. Craig, a former Bulls offensive line coach, left the program last year for Miami Southridge, which is closer to his home. And those sources, Rolle said, "I'm not sure sure who they are."

"Some people do a lot of talking, they like to be spokesmen," Rolle said. "But they don't know. You know me. I don't like talking on the phone. I'm a face to face guy. I talked to coach after I read something in the paper... We ironed it out."

What also got ironed out, Rolle said, was the situation regarding Chandler. Rolle admitted he was shocked when he first heard Chandler was no longer headed to UM. But he said after he looked into the situation, spoke to Shannon and Chandler, Rolle said he came to "a clear understanding" of why Chandler won't be playing for the Hurricanes.

"A kid may commit early, but a school can change their mind the way a kid changes their mind," Rolle said. "It was just one of those things, a kid commits early and trusted the situation. But it's a business. s years go by, the recruiting process changes. Unfortunately, the recruiting process probably changed for Miami. Like coach told me, they had a lot of injuries this year, young guys and old guys coming back. It was a numbers thing. At first, Todd was kind of distraught, he really didn't understand it. But after we talked to him and things like that, he understood by taking trips to other schools -- he understood what went down with him.

"I was just shocked because he wanted so badly to go there because of the guys who were there previously. He had a nice little bond with the guys who were here before and because he was one of the younger guys who started and played here a lot when they were here. He had decided before anything that's where he wanted to go play. At the time, it was something big going on with us, winning the national title. So, everybody was excited, thought it was only natural Todd would go to Miami too. He made a commitment to himself to commit to Miami because he was sold on it. 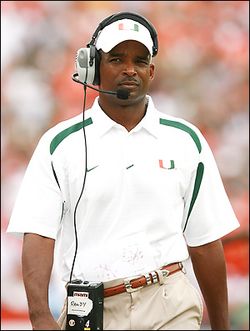 "But usually, when a school offers a kid, the coach gets a letter. That's the thing. I never got a letter for Todd. I looked for it, didn't find it. That's how [UM] covered their butts."

Rolle said the situation with Chandler proved to be a valuable lesson for his entire team. He said he recently had a scout explain how programs "have different needs" each and every season.

"People assume the best players at Northwestern should go to Miami. And to me, that's how I believe it should be," Rolle said. "When you go to Alabama, the best players from Alabama go to Alabama. Same at Texas, LSU, Georgia. You may see one or two guys from other parts, but that's it. Me, personally as a coach, I always tell the kids to look around, don't say no to a school just because you've chose one. You never know what can happen. A coach might get fired or leave to another school. Now, that school doesn't want you anymore.

"Sometimes, kids just love a school so much, they don't want to hear 'No.' If you look at Antonio Bryant and Torrie Cox, my guys here from the 1998 team. They were going to die if they didn't go to University of Miami. And here comes this guy from Pittsburgh. Torrie was going to die if he didn't play running back. I showed him a media guide of all these cornerbacks and their bios about how they were running backs. What happened? Torrie went to Pittsburgh, got drafted in the third round and is still playing. Same for Antonio. The point is, Miami ain't always going be ready for you. But I think us being right here in Miami, UM should get its choice and all the coaches around the county should support that."

Rolle insists the Canes haven't loss any ground -- or faith -- from other potential recruits at Northwestern. In fact, he said UM is on solid ground with three of the Bulls' premier 2011 recruits: quarterback Teddy Bridgewater, receiver Eli Rogers and linebacker Lyndon Edwards. In fact, Bridgewater, considered the top player in the state in 2011, told me his love for the Hurricanes hasn't changed.

"I've always a good feeling about the Miami Hurricanes," Bridgewater said. "They're my hometown school and I've watched them put a lot of players in the NFL. As far as Jacory, I watched him as much I could this season and picked up as many things as I could from him. I like the way he puts touch on his passes.

"What they did to Todd Chandler, it's just what college is. It opened some eyes. You may be committed to a college and you never know what can happen. In the end, Miami did what it had to do. Since my ninth grade year, I've seen a lot of my teammates go there and play. Right now, I'm wide open. I've got six offers -- Florida, Miami, Tennessee, West Virginia, Rutgers and FIU. My plan is to take as much time as I need to figure it out."

> Rolle said he's been very happy with the Hurricanes have handled the current Bulls at UM and he hasn't heard any complaints from his players. When I asked him about receiver Kendal Thompkins possibly seeking a transfer, he said Thompkins continues to work out at Northwestern with his UM gear and hasn't mentioned a work to him about leaving the program.

"I tell the kids all the time, when you go to college there are going to be five, six guys just like you, you have to compete," Rolle said. "Personally, I think a lot of luck is involved. Injuries could get you. But luck is big. You might make one catch in a game or practice that catches the coaches eye. You just have to be ready when the opportunity comes. Kendall hasn't told me once he isn't happy there. I haven't asked him either. But the kids coming back to me complaining? No. It's not happening."

> If you are wondering where Northwestern's best players will be heading this year, it looks like Louisville is the destination. Coach Charlie Strong visited with Rolle Wednesday right before I got to Northwestern. Running back Corvin Lamb, offensive lineman Torrian Wilson, receiver Michaelee Harris and Chandler will likely be signing with the Cardinals. Oddly enough, former Hurricanes recruiting coordinator Clint Hurtt will be the guy coaching Chandler.