Frank Haith and his basketball team came back from their West Coast trip with more than a 23-point win over Pepperdine Sunday night. The Hurricanes landed their third commitment for the 2010 class shortly after their win when 6-5, 220-pound forward Erik Swoope from North Hollywood Harvard-Westlake got a call from assistant Michael Schwartz and realized he'd been offered. 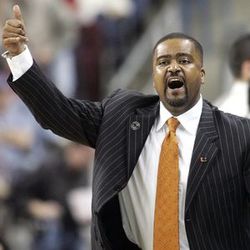 "It's actually a pretty funny story," Swoope said. "I had been talking to Coach Haith and he told me how he'd like for me to be a part of his family. I thought it was just a nice gesture. But it turns out he was offering me. When I talked to Coach Schwartz, he said, 'So, how do you feel?' I said, 'It would be great if you guys would offer.' He said, 'Coach did. So, do you want to commit?'  I said 'Absolutely."

Unranked by Rivals.com, Swoope is rated the 43rd best power forward in the country according to ESPN.com. Swoope said despite being 6-5, his game is really more tailored to playing in the paint.

"We haven't gone into full conversations about where they want me to play, but they're talking about developing my skills and having me shoot from about 15 feet and out," Swoope said. "They want to use my post skills as an advantage. My guess it's a combo of a three or a four. I can do both."

Swoope, who has a 3.2 GPA and was also being courted by Harvard, is averaging 18.8 points, 8.5 rebound and 2.5 steals through 12 games. He said he averaged 13 points and nine rebounds a game last season as a junior.

"Coach Schwartz called me at the end of July and he expressed that Miami had some interest," Swoope said. "I played with the Pump N Run Elite team and I thought things were going well until I moved and we lost communication. Three weeks ago, we called Coach Schwartz and told him about a tournament I was playing in and if they wanted to see me. I saw Coach Haith when they came down to my practice the day after New Year's and it just went well from there."

Swoope, who grew up playing soccer and basketball, said he feels like UM will provide great balance for him academically and athletically. Born with a passion for math and science, he said he was considering Harvard for its Business Management and Sports Management programs. But he sees he can do the same at Miami while playing in the ACC. The other schools to offer Swoope: Washington State, Utah, San Diego State, UNLV and Portland.