McCartney: "I can't wait until Wednesday"

Miramar High receiver Ivan McCartney has been hiding out since his trip to the University of Miami this past weekend, trying to avoid the pressure and the questions from people who want to know if he's decided between the team he grew up rooting for (Miami), the team with his former teammates (West Virginia) and the program he said he had secretly chosen (Florida) early in the recruiting process.

So which one will it be? "I don't even know yet," McCartney said. "The trip to UM definitely made it hard for me. It was awesome." 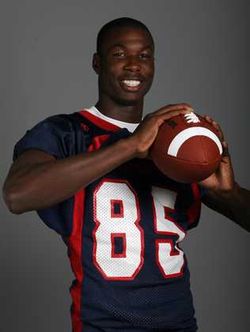 McCartney, a 6-3, 185-pound U.S. Army All-American, said he spent his two days hanging out with host and potential future quarterback Jacory Harris. "We started cooking from the moment we were in each other's presence," McCartney said. "He's real down to earth. We went to the Grove, walked the strip, ate a lot, the usual. We hung out with the players, played games. You can tell the University of Miami is just a big family."

Still, he left without making a commitment, rather a promise to coach Randy Shannon he would make a sound choice. "He said no matter where I go, he'll be happy for me," McCartney said. "He said just make sure wherever I chose to go make sure that's where I want to go, that it's the place for me. Coach Shannon is real cool like that."

McCartney said any rumors of him having picked a school already are false. He said people saying he'd choose West Virginia because of his academic situation "don't know what they are talking about."

"As far as I know, you need the same ACT or SAT score to get into Miami as you do as West Virginia. I think you need an 18," said McCartney, who has raised his GPA from a 2.1 to a 2.7 and scored a 15 on the ACT exam. "Regardless of which school I pick, I know I have more work to do in the class room. This decision will be based on the best fit for me."

So what are his family members and friends saying is the best fit? According to McCartney, his teammates would love for him to pick West Virginia, but are not pressuring him at all. And his mom, who would like for him to stay home, has told him the same.

"Believe it or not, Gino [West Virginia quarterback Eugene Smith] tell me to pick the best school for me," McCartney said. "My mom told me as long as I'm comfortable and able to do something after football with a degree, she's fine with wherever I go."

McCartney said that choice would have been the Gators at the start of the season. Florida's need for receivers and its rich recent history were attractive early on. But he said the way Miami and West Virginia have come at him this year have made it "a three horse race."

"To be honest, in the beginning of the football season Florida was the school I was going to go to," McCartney said. "But I kept it quiet. There's something about Florida I don't feel for the other schools, a very strong, loving feeling. The atmosphere is wild. The campus is outrageous. They have swagger. A lot of people thought Florida was going to drop when Billy Gonzalez, who recruited me, left. But I learned early on you can't go to a school off coaches. Any coach can leave at any given time. You success depends on how you work as a player. Florida is an awesome place with whoever is coaching there."

As for West Virginia, where former Miramar quarterback Eugene Smith is waiting to throw him passes, McCartney said he believes its only a matter of time before the Mountaineers win a national title. "They lack receiver depth, which is huge for me," McCartney said. "The coaches are very down to earth and cool. They have a family over there, just like Miami. One thing I noticed, though, is they lack the swagger. If I go up to West Virginia, I'd love to bring some of the swagger up there. Because to me, they have a chance to go to the national championship soon. With Eugene, Noel [Devine], they have a chance to do big things."

The Hurricanes, he feels, are also close to winning a national title. And if he had to sit out a season, redshirt and learn on the scout team, he said he'd have no problem with that. "There's nothing left to say about Miami, really," McCartney said. "It's The U. Miami is just a home away from home. Players are cool. Coaches are cool. Of all the schools I've visited, they are the most close in a family way. And nothing makes you feel better than a family."

McCartney will announce his decision Wednesday at 9:30 a.m. "I'm going to do it real big, maybe bring in 10 hats to confuse people," McCartney said. "Honestly, I just can't wait until Wednesday."