Wednesday evening in front of a national audience, Seantrel Henderson, the nation's No. 1 offensive tackle announced he had chosen USC over Ohio State and the University of Miami. 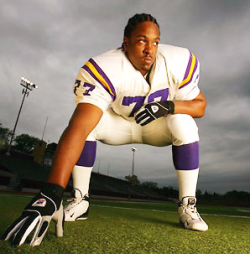 Turns out, Henderson picked the Trojans, but still hasn't signed with them yet. According to an interesting New York Times article, Henderson's father said the family is waiting to see what happens with a pending NCAA infractions committee investigation into USC.

No word if that means Henderson would switch to UM or Ohio State if the family doesn't like what it hears when the infractions committee meets with USC officials Feb. 19-21. But you have to imagine the Hurricanes would have a shot -- especially after the way they reportedly treated Henderson on his trip. He has until April 1st to sign a National Letter of Intent.

According to the article, Henderson's trip to UM supposedly included limo rides and trips to night clubs where he hung out with Pro Bowlers Willis McGahee, Ed Reed and Bryant McKinnie. It is a must read.

A FEW MORE LEFTOVERS FROM WEDNESDAY...

>  Shannon said six recruits are currently enrolled at UM: OL Malcolm Bunche, QB Stephen Morris, LB Tyrone Cornelius, WR Allen Hurns, RB Storm Johnson, and OL Shane McDermott. Shannon said Booker T. Washington running back Eduardo Clements has until today to enroll at UM. Clements told me last week he was waiting on his transcripts to get in and was confident he would make it. But it doesn't appear to be the case.

> Shannon was asked about running back Graig Cooper's health on Wednesday. All Shannon said was that Cooper was "rehabbing."

>  Receivers coach Aubrey Hill has added recruiting coordinator to his title. Hill takes over for Clint Hurtt, who left UM in mid December to take a position at Louisville. Hill has experience with the responsibilities having done it while he was the University of Pittsburgh.

> Shannon told the Palm Beach Post's Jorge Milian that linebacker Arthur Brown won't be coming back to UM. I've been told Brown's plan is to play at Butler Community College (Kan.) this season before jumping on in a year at Kansas State. Nobody from Brown's family -- nor his mentor Brian Butler -- have returned phone calls to address that.

> The ACC will release its schedule at 2 p.m. later this afternoon. We'll see if the Canes are given another tough month of September.