The University of Miami's rich NFL history is nothing new. New Orleans Saints tight end Jeremy Shockey, a four-time Pro Bowler, and linebacker Jonathan Vilma, a two-time Pro Bowler, have helped add to it over the past decade. 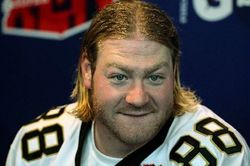 Sunday night, though, in helping the Big Easy to its first Super Bowl title, the two prominent members of the last UM team to win a national title (2001) joined a pretty elite list among those in the Canes' pro fraternity. That would be Hurricanes who have won not only a national championship ring, but a Super Bowl ring too. The list, before Sunday, was only 13 strong (according to the UM media guide). That included:

It seemed only fitting that as I was walking to the media bus close to midnight, I spotted Vilma and Shockey sitting next to each other on the Saints team bus, soaking in their greatest professional accomplishment. 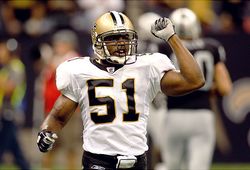 Shockey didn't have a spectacular night (3 catches for 13 yards), but still hauled in what turned out to be the game-winning touchdown pass, a 2-yard slant pattern he hauled in at the goal line.

"It's a great feeling right now," Shockey said. "I don't care about the catch, I just care about the team. Ever since you start playing football, you're dreaming about playing in this game. I dreamed and prayed all day and night about being in the situation I'm in right now. And that's what happened."

Vilma played a bigger role at middle linebacker. He led the Saints with seven tackles and was credited by defensive coordinator Gregg Williams for making checks/audibles "on at least 20 plays" that got the Saints "into the right defenses." No small achievement considering he was going against Peyton Manning, the Jedi master of audibles and checks at the line of scrimmage.

Vilma's biggest play came with the Saints down 17-16 and the Colts facing a third and long at the Saints 33-yard line. Vilma, who was supposed to blitz on the play, checked off and ran back in coverage to bat away a pass intended for Austin Collie near the goal line. If he's not there, Collie catches it and scores.

"There aren't many times when you see a defense actually beat Peyton Manning, especially at a time like this, the magnitude of this game," Vilma said. "But this was one of those rare times and I'm glad I was a part of it."