Jim Morris knows you can win with speed and you can win with power in your lineup. He's done it both ways with the Hurricanes. But the one ingredient the veteran of 27 seasons knows he can't win without is pitching. And at least on paper, the 2010 Hurricanes appear to have one of the strongest veteran staffs in the country. 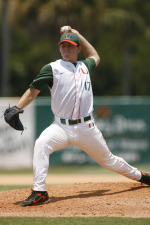 It's headlined not by just one ace, but two veteran Friday night starters: left-handers Eric Erickson and Chris Hernandez. Erickson, back after having missed the 2009 season following Tommy John surgery, has a career 19-5 record with a .327 ERA, 131 strike outs and 34 walks in 30 starts. Hernandez, Collegiate Baseball Newspaper's National Freshman of the Year in 2008, is 18-5 in his career with a 3.20 ERA with 210 strikeouts and 49 walks in 33 starts.

And their teammates can't stop raving about how good they've looked -- especially Erickson, who spent the 2009 season watching his teammates struggle without a consistent No. 2 option.

"He's way better than he was two years ago," All-American catcher Yasmani Grandal said of Erickson. "He's always had his control. Right now, he has control with a better fastball, better stuff. He's worked on his offspeed and that makes him that much better. Overall, he's just a better pitcher."

Said sophomore third baseman Harold Martinez of Erickson: "He's just as good as everyone said he would be. He spots the ball perfectly, a lot of good off-speed stuff that stays low. He gives you nothing good to hit."

Hernandez, last year's Friday night starter, has received similar compliments after failing to live up to his stellar freshman season when he went 11-0 with a 2.72 ERA. He said he plans to how Erickson pitches on Friday nights and to take plenty of notes.

“The way we throw, we feed off each other," Hernandez said. "We work together. I’m going to get that great opportunity to watch him throw on Friday nights and really see what the weaknesses are on the other team.” 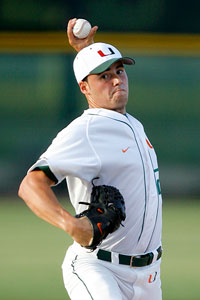 UM pitching coach J.D. Arteaga said both will be on a strict 85 pitch count early on, but believes there is no reason to be concerned with either of his aces getting tired. "All we can go by so far is what he's done in intrasquad and he's had no setbacks," Arteaga said of Erickson. "His arm has been great. His velocity is good. Both him and Hernandez threw five innings last week and showed no signs of getting tired. Like any pitcher, he's going to get tired at some point. If we have to get him out early, we'll get him out early. But I wouldn't think he needs any special treatment than any other pitcher."

> Arteaga said he and Morris "could have gone either way" in deciding which of the two aces got the Friday night starter's role. Morris said Erickson simply showed more consistency. "His stuff is great," Arteaga said. "From the first time E's been on the mound, he's been throwing strikes, which is what makes him who he is, makes him successful.

"He just has to be very consistent in what he does. He doesn't throw real hard, but he throws hard enough. His curveball is not great, but it's good enough. The changeup is a very plus-plus pitch and he throws them for strikes with any count. That's always going to win in baseball."

> Arteaga said Hernandez's struggles last year (7-5, 4.76 ERA) had more to do with the stress he put on himself than the effort he was giving. Still, Arteaga admits, adjustments had to be made. And it appears Hernandez has made them. "He's doing a much better job getting ahead of guys and really being able to use his pitches as an advantage," Arteaga said. "His velocity was down a little bit last year. It's back up to what it was before. The biggest thing with him is not doing too much and just being Chris. Not trying to get everybody out with every pitch he throws. That's what got him in trouble last year."

> The third pitcher in UM's rotation will be sixth-year senior Jason Santana. The 6-3, 215-pound right hander has had three arm surgeries between high school and college. Yet, after going 6-1 a year ago with a 5.40 ERA, Morris said Santana has been as consistent as anyone in the spring and fall. "He's going after people, got a great strike-walk ratio, has pitched well enough to be in there," Morris said. "To me his only question is can he hold up physically, and hopefully he will."

> Freshman left-hander Steven Ewing won the battle with freshman right-hander Eric Whaley for the midweek, No. 4 starter's role. Arteaga said Ewing would likely see some middle relief work this weekend against Rutgers along with Whaley.

> The closer's role was won by senior David Gutierrez, who has big shoes to fill after the departure of All-American Kyle Bellamy. Gutierrez, whose older brother Carlos was UM's closer in 2008, has started 20 games in his career and gone 11-6 with a 4.33 ERA. Arteaga and Morris said he has the ingredients to handle it. Junior left-hander Iden Nazario, who went 7-6 with a 7.26 ERA in 15 starts a year ago in the No. 4 role, will be his setup man.

"We didn't know what his brother was going to do a couple years ago and he went from the starting role to the closer role," Arteaga said of Gutierrez. "He throws strikes, has good movement. He can field his position, hold runners, do all the things you ask of a closer. As far as whether or not he's going to do a great job, we really don't know until he goes out there in the ninth inning, it's a one run ball game and its a pressure situation. Without a doubt, the toughest inning to throw is the ninth inning. But he's got all the things you need to be successful. So, we'll see once he gets out there."

If Gutierrez struggles, the Hurricanes might turn to freshman right hander E.J. Encinosa. "Stuff wise, he has the best stuff to be the closer on our team," Arteaga said. "It's a matter of getting his feet wet early on. Hopefully, he responds well to pressure in certain situations. If not this year, very soon I could see him being the closer. the guy throws 90-94 with great sink and a big time slider. If he throws strikes and handles the pressure well, we're going to have a good closer on our hands the next couple of years."

> Three pitchers are returning from offseason surgery according to Morris. But only two will likely be back in time for this season: right-handed reliever Taylor Wulf (2-0, 3.24 ERA) and sophomore right-hander Travis Miller (3-0, 4.33 ERA). Morris hopes to get both back by next month. It will probably take a little more time for senior right-hander Michael Rudman, who was 3-0 with a 1.71 ERA last year out of the bullpen. "Wulf is throwing long now, coming on good," Morris said. "[Miller] had [elbow nerve] surgery, but it's a lot less complicated than elbow or shoulder surgery. He's throwing now. We need him in the rotation."