A good day for UM recruiting

GREENSBORO, N.C. -- Is it just me or did Wednesday's news regarding five-star defensive back Latwan Anderson feel like the first big victory in recruiting for the University of Miami in a while? 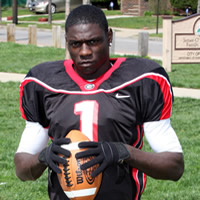 I'm not trying to put a negative spin on it. It's great the Canes were able to land a top-notch recruit they weren't supposed to get. But ever since Jacory Harris and those other guys from Miami Northwestern came in as part of ESPN's No. 1 recruiting class in 2008, the public perception has been the Canes have missed out on most of the big-time kids they really wanted.

You remember the names and the stories. It started with Patrick Johnson (now Patrick Peterson) dumping the Canes for LSU. Then, there was Matt Patchan, son of a former Cane, choosing the Gators over UM and talking trash about his dad's program. A year later, Kayvon Webster, Defensive player of the Year in Miami-Dade, switched from the Canes for USF on National Signing Day. Then, there was the whole Bryce Brown fiasco, which ended with him choosing Tennessee a few weeks after NSD. This year, Canes fans crossed their fingers for Seantrel Henderson and Ivan McCartney. Again, UM came up short.

Today, though, was a good day for UM. Anderson, a big-time talent in Ohio State's backyard, basically fell into the Canes' lap. Before Signing Day, he wasn't really even on the Canes radar. A U.S. Army All-American, he picked West Virginia on national TV and was all set to go there. Now, he's headed to UM without even being really recruited by UM coach Randy Shannon and his staff.

The general response I gathered from fans since the news broke Wednesday morning was "it's about time." But is it really fair to say that? Last month, when the Canes wrapped up their 2010 signing class, the overall consensus from experts was that Miami underachieved. The thought was the Canes were supposed to do better with all of the talent available in their backyard.

The truth is, nothing burns Shannon more than the perception he and his staff aren't doing their jobs as good as they should be doing it when it comes to recruiting in Miami-Dade, Broward and Palm Beach Counties. In his eyes, there have been a lot of great recruiting days since Jacory and company picked The U.

LUNCH WITH RANDY... Three weeks ago, I got a chance to go out to lunch with Shannon. There were no tape recorders, no note pads. It was just two guys born and raised in Miami talking about the college football program they've been around (In my case, from a seat far away from the field for most of it). The hour and half I spent with Shannon was about as close as I've been able to get to him in the four years since I've been covering the team.

Shannon, guarded by nature, doesn't trust the media one bit. He thinks most of us don't do a good enough job investigating anything before we write it. But he also doesn't think he needs to volunteer any information he doesn't have to. This lunch -- in part -- was for us to get a better feel for where we come from, where our opinions are formed.

He says there are many issues that has made recruiting local players to UM a lot tougher than before. At the top of the list: Academic failure (test scores or low GPAs) and arrest records. The old UM might have been to take a chance those kids. But not this one run under President Donna Shalala.

Then, there is the issue of individuals (street agents/assistant coaches) who are making deals (either for money or employment) with other colleges to send players away. On top of that, there are a few high school coaches for one reason or the other who have agendas against him and the program (in some cases because Shannon didn't hire them as assistants he was named UM's coach). Add it all up, and the field of high-end available recruits available to UM has shrunk.

Shannon says he isn't asking for pity. He says he just thinks there needs to be a better understanding of why UM ultimately might not recruit a certain player or end up with them on National Signing Day. Ultimately, he says, every player now at UM has gone through the recruiting ringer (background checks, academic checks, character checks). Ultimately, he says, he is the final person to sign off on any written scholarship offer the program hands out. That whole Todd Chandler fiasco? Consider it one of a few mistakes by a now former assistant. But we know through Miami Northwestern coach Billy Rolle that Chandler was never given a written offer.

Shannon says he is trying to help as many local coaches (many who are young and replacing legends) as he can better understand their responsibilities. He said he talks to them about image (he's scolded several local coaches for wearing bagging jeans and sunglasses on the sideline), instilling discipline (he says not enough suspend their best players for breaking the rules or missing practice) and not falling prey to recruiting promises (some high school coaches he says have been burned by college programs who promise they'll give them a job in exchange for a recruit). But it's hard sometimes, he says, to get through to them.

Whether you are a Shannon supporter or not, you still have to respect the fact the position he was put in wasn't easy. The Canes were well on the way to going in reverse by the time he took the steering wheel. Little by little he's made the program better than it was when he took it over. Nobody can argue that there isn't more talent on this team here now than when got it. Miami has a chance in 2010 to be really good again. And the bottomline is Latwan Anderson would not have picked UM if he didn't like the direction the program is headed in.

> I didn't make it up in time to catch the Canes basketball team practice at the Greensboro Coliseum, but I'll be at Thursday's ACC Tournament game against Wake Forest. I'll be sending updates on Twitter throughout the game. Our Michelle Kaufman wrote about the Canes' uphill battle coming into the tournament.

> Here is a highlight video I found on Latwan Anderson on YouTube.