« UM should be nastier up front (on defense at least) | Main | At midway point, UM baseball better than '09 »

The University of Miami announced Wednesday that freshman guard Antoine Allen has decided to transfer and pursue basketball at another school. 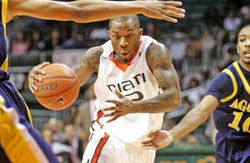 Allen, a 6-1 guard from the same AAU program Jack McClinton played for in Baltimore, averaged 2.9 points and 0.8 rebounds while converting 41.7 percent from long range in 17 appearances last season. He was named to the All-ACC Academic Men’s Basketball Team.

“I appreciate Antoine’s efforts this season,” UM coach Frank Haith said in prepared statement. “I support his decision to seek additional playing time with another program and I wish him well.”

The Canes return nine players including four starters -- Durand Scott, Reggie Johnson, DeQuan Jones and Julian Gamble -- who helped the team reach the semifinals of the ACC Tournament. Allen played one minute against Wake Forest in the ACC Tournament and had not played at all before that since the trip to Maryland on Jan. 26.