« News & notes from Pro Day, final spring practice | Main | UM should be nastier up front (on defense at least) »

TRAZ POWELL STADIUM -- If you took your eyes off the field Saturday at Traz Powell Stadium for even a second, you might have missed a lot. This year's Spring Football Game turned out to be about as action-packed as any played before it -- chock full of scoring from start to finish. 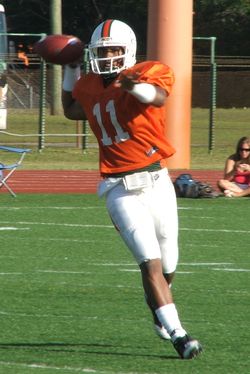 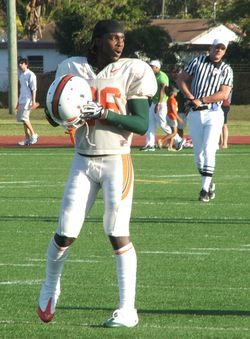 > THE GOOD: Better quarterback play and pass protection. Three weeks ago in a scrimmage at Fort Lauderdale's Lockhart Stadium, A.J. Highsmith, Stephen Morris and Spence Whipple had trouble just staying off their backs (they were sacked a combined seven times). Saturday, UM's offensive line played much better (only giving up three sacks). The extra time allowed for them to have a lot more success passing. After completing just 14 of their 23 attempts for 169 yards and one touchdown three weeks ago, the trio combined to go 30 for 57 for 452 yards, 6 TDs and 3 INTS... Ray Ray Armstrong stood out with two interceptions.

> THE NOT SO GOOD: Secondary got torched at times. Sophomore cornerback Brandon McGee is going to want to delete Saturday's Spring Game from his memory banks. He was beaten several times in coverage and got an earful from defensive backs coach Wesley McGriff, who told him "you are better than that." For what it's worth, with All-American junior-to-be Brandon Harris out of the game, Canes quarterbacks spent a lot of time picking on walk-on Nate Gholston (listed at 5-7, 170).

> INJURIES: Looks freshman running back Lamar Miller was the only one to suffer an injury. He went down with what I was told was a separated shoulder.

I'll have more for you later including audio interviews and photos.