CORAL GABLES -- It was a long first day back for me out at Greentree Practice Field after spending the better part of the last two weeks covering the Marlins. Here are a few news and notes from Pro Day and the final practice of the spring before Saturday's Spring Game...

A group of a dozen Hurricanes participated in Friday morning's Pro Day and the overwhelming thought in my mind as I watched it with other reporters from high above on the second floor of the Hecht Athletic Center was: 'How many of these guys will really be Pros?'

At this point, it's hard to see anybody in this class beyond tight end Jimmy Graham, linebacker Darryl Sharpton and offensive tackle Jason Fox getting drafted. The rest of the guys, like center A.J. Trump, running back Javarris James and possibly tight end Dedrick Epps are going to have to earn invites to camps and work hard to make practice squads and eventually impress enough to make the team.

That, however, isn't necessarily a bad thing. As Trump put it, being able to pick a team has its benefits. "I know I'm going to be a free agent," said Trump, who has workouts set up with the Lions, Titans and Bucs. "But that's actually a good situation for me because I get to choose where I'm going to go. In the end, I'm more excited about just getting my foot in the door somewhere else and representing the university." 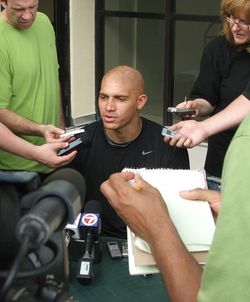 GRAHAM WILL PROBABLY GO FIRST... It's pretty clear the guy drawing the most attention is Graham. The 6-8, 260-pound tight end and former power forward has had his toughness question by analysts like ESPN's Todd McShay. But it's obvious his athletic ability and upside -- as well as the success of other basketball players turned football stars of the past (Antonio Gates, Tony Gonzalez) -- has lots of teams interested.

After participating in the Senior Bowl and turning in the second-fastest 40-yard dash time among tight ends at the NFL Combine in Indianapolis (4.56), Graham passed on running the 40 Friday at the advice from his agent and really didn't do much. It was a smart move to be honest. As it stands, eight to 10 teams -- including the Miami Dolphins -- are interested in bringing him for workouts beginning Monday.

Pretty soon, Graham is going to have to send a big thank you letter to former Hurricanes quarterback Bernie Kosar. It was Kosar who drove down three times a week to throw passes to Graham and convinced him to give football a shot last summer. Graham said Kosar still calls him once a week to check on him.

"Being the first Cane taken is something I don't even think about," Graham said. "I'm just excited about the opportunity to play in the NFL."

FEELING FOR FOX... If there is one guy to feel sorry for these days it is former left tackle Jason Fox. After starting 47 games in his career, the past few months have been awfully tough for the 6-7, 314-pounder from Texas.

A knee injury cost him the final regular season game and the bowl game, then surgery. Friday, he was hoping to have a huge day -- especially after being unable to participate in the combine in Indianapolis. Instead, it turned out to be trouble. The All-ACC First Team selection suffered a left hamstring injury and slipped to the ground when running the 40-yard dash (It was on the same surgically repaired knee). Fox didn't talk to reporters afterward. But some draft experts were thinking he would go in the fourth round with a good Pro Day. It obviously didn't go that way.

"It's been tough to watch -- especially having been through so much with the guy, you've seen him play injured," Trump said. "It's been a difficult road for him. He kind of gave his heart and soul to this team. Now, he's kind of paying the price for it. But he'll bounce back. I told him many times I went to that all-star game and he can block all those guys. He'll get his shot and he'll be an established NFL player."

SHARPTON CONFIDENT... Darryl Sharpton would guess what round he's going to get picked , but he's confident he won't be around long. He was more than happy with his workout Friday where says he improved in every category. He said he ran a 4.6 in the 40 (he ran a 4.7 at the NFL combine, went from 24 to 26 reps in the bench press and ran the shuttle in 4.2-seconds. He also broad jumped 10-1.

"I'm a confident guy. I think I'm one of the best linebackers in the nation," Sharpton said. "And I expect to get drafted accordingly."

MORE NEWS AND NOTES FROM FRIDAY

I asked Shannon for one positive he thought the team got out of this spring: "The development of certain players, developing young guys on the offensive line, the defensive front," Shannon said. "Like LaRon Byrd took the next step, the running backs. We knew our running backs were young, but then you see them progress. We've got a defensive line, now it's time to turn it on, and they did. You watch the quarterbacks be able to handle things. Everything changed a lot, which was real good, and you were happy to see those things happen."

I asked him what he wasn't happy with: "Bonehead stuff, turnovers," Shannon said. "But we didn't have that many turnovers because we worked in camp on turnovers. Last year we had some touchdown scores off returns, so every time there's a turnover I don't blow the whistle in practice. They know that's full speed. We're trying to get those things fixed from last year.

Wesley said he knew Berry since the eighth grade, played AAU basketball and maintained a friendship with him through Facebook. "It seems like it ain't real," Wesley said. " He was a real cool, laid back guy, standup guy, a guy you can always depend on. I'm shocked."

Wesley said he called former high school teammate Aaron Davis, who plays for FIU, on Friday to pass along his condolonces. "The first thing that came to my head when I heard what happened was Bryan [Pata]," Wesley said. "I just told Aaron to keep his head up. I went through the same thing my freshman year when Bryan died. I told him just to keep his head up and keep praying."