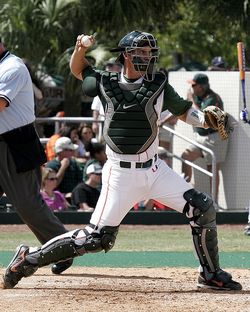 Before he got any further, I threw a little jab his way for fun pointing out how Katie's Meier's club was the first UM team in a while (since the football team in 2002) to play for a postseason championship. "You trying to give me a little [grief]," Morris playfully responded before everyone in the room began laughing.

Even though the ninth-ranked Hurricanes (20-7, 10-2 ACC) own the same overall record at the midway point of the season this year as they did last year, you get the sense these Canes are a much better candidate to reach Omaha.

"I don't think any team would compare to the '08 team we had," said No. 3 starter Jason Santana, a sixth-year senior who provided a little perspective on this year's team after the Canes' sweep of Wake Forest on Sunday.

"But that being said, this team has a lot of chemistry together. We're a pretty tight knit group... everybody is playing pretty good at their spot. We're just looking forward to the second part of the season."

The second part of the season will be more challenging. None of the four ACC series UM won during the first half of the year (Boston College, Duke, N.C. State and Wake Forest) were played against teams with winning records in conference play. But four of the final six conference series -- Virginia Tech (6-6), Florida State (7-5), Georgia Tech (11-1) and Virginia (8-4) -- will be.

Morris' No. 1 concern at the moment is finding a consistent closer at the backend of the bullpen. Right-hander David Gutierrez, who was given the job entering the season, has struggled to fill the shoes of former All-American closer Kyle Bellamy. Gutierrez has five saves, but a 7.62 ERA and Morris knows that won't be good enough.

The best candidate might be true freshman E.J. Encinosa, who in a team-leading 14 appearances has a 1.86 ERA out of the pen. But Morris doesn't appear ready to hand Encinosa such a big responsibility.

"He has good enough stuff to do anything, be an outstanding starter or outstanding closer," Morris said. "It's something we've thought about and talked about. Whether he's ready for that, I'm not sure at this point time. But there's no question he has good enough stuff to do that. That's the most important role we have to figure out. If you don't get it done late, you don't go to Omaha.

"He's just a baby. We're trying to bring him along."

> Morris isn't complaining about what catcher Yasmani Grandal is doing these days. Not only his he providing leadership, but his bat has been red hot. Grandal is hitting .388 and has on-base percentage of .504, both stats rank in the Top 5 in the ACC.

> Sophomore third baseman Harold Martinez has also upped his game. Not only is he hitting .324, second-best on the team, he leads UM with eight home runs and 28 RBI.