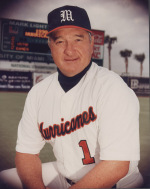 Not going to do a LIVE! blog or anything like that, but feel free to check up on the score throughout the night. When something happens -- hey! There went the MetroRail! -- I will post it here.

That was the third homer the Terps A-Rod had hit on the first pitch of the game -- and all five of his taters this year have come in the first inning. But then Maryland went down in order so that was that.

-- B1: The Canes come right back and lead 2-1 after getting two runs in the frame. With one out, Frankie Ratcliff walked, then raced home when Yasmani Grandal laced a liner past the first baseman into right field. Scott Lawson scored from third on Harold Martinez's sacrifice fly to center.

So there you go...Again, check back throughout the night.

-- T2: The Terps are hitting Santana hard, with back-to-back doubles here giving Maryland a 3-2 lead. Canes end a threat when Gary Schneider gets caught trying to steal third base.

-- OK, Maryland outfielder Matt Marquis has been taken to the hospital after colliding with teammate Jon Wilson. Read more about that here.

After that, the Hurricanes loaded the bases with a pair of walks and tied the score 3-3 when Harold Martinez flew out to center. Wilson, the new CF, then fired to third and caught Scott Lawson to end the inning. But the run scores, and Miami ties it.

On to the fourth.

This game is taking forever...

-- B4: Miami retakes the lead 4-3 after Michael Broad hits into a 6-4-3 double play allowing Chris Pelaez to score from third...

--B7: Miami tags on a run when Stephen Perez made it 5-3 in the seventh by scoring on an error with two outs.

Canes got a strong performance out of starter Jason Santana.

Santana left the bullpen alone until the eighth as he put the Terps down in order in the fourth and sixth innings and spread three hits over his final five innings of work as he struck out seven and left four runners stranded.

--B8: Canes add another run in the eighth as Zeke DeVoss steals third with two outs and comes home on single to left from Stephen Perez.