Hurricanes on Rivalry: Omaha is The Story ... Jim Morris: No Habla Espanol 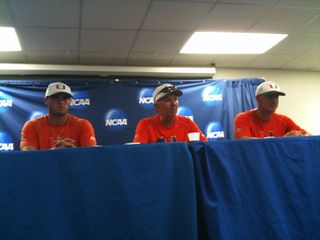 GAINESVILLE – Miami baseball coach Jim Morris met the gathered media Thursday afternoon prior to the start of the best-of-3 super regional in Gainesville.

Morris and his two players spoke on a variety of subjects on Thursday – including how Morris could possibly live in Miami as long as he has and not learn Spanish.

Personal note: I was being a little sarcastic there. I grew up here and my Spanish is pretty horrid. So I know where Morris is coming from. I would love to, have tried to improve, but....Anyway....

That question was posed after Morris – asked about Florida having four coaches during his tenure at UM – said that former UF coach Andy Lopez sparked some fear in him when he visited South Florida.

“He worried me to death when he came to Miami and was speaking Spanish to my players,'' Morris said with a laugh. “No comprende. I thought he might come into Miami and steal some of our guys away. Thank goodness most of the guys wanted to stay home.” 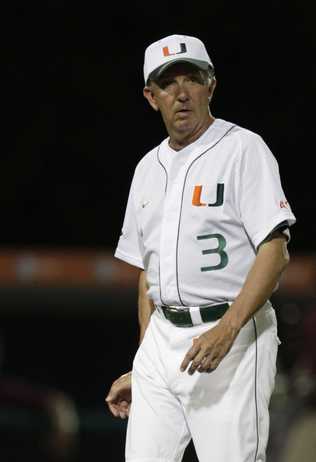 That sparked a second question from a reporter from the Associated Press on why Morris didn't speak Spanish.

Morris admits he tried to learn the language with the use of a tutor, but because he isn't immersed in the language, it didn't really stick – and he has been able to survive without it.

“I've learned a few words, but I can't repeat them,'' Morris said laughing.

“You think you need Spanish in Miami, but you really don't. I had a tutor for a couple months, every morning 8 until 10. Then I had my coaches meeting and had the worst headache I ever had at 10 every day. They spoke no English [in the tutoring] and I was trying to do it. But once I left that room, everyone spoke English to me.

“We have Latin players who don't speak Spanish. They are now second and third generation and don't speak Spanish at home. If I go to a game and there are five Cuban guys sitting there speaking Spanish, I'll walk up – and I think it's a thing of courtesy – that they stop speaking Spanish. Originally it was different for me. But I have no reason now to have to do that. I always ask J.D. [Arteaga] to watch my backside around the guys.

“I'm in a very relaxed atmosphere. I don't think I need it. But it would be nice. But I don't have time, I haven't made time, and no one speaks Spanish to me. They might speak it about me, but not to me.''

Now, onto the baseball stuff....

Morris said he is excited to be back in the supers, but would much rather be in the Gables. As far as trash talk goes between the two teams, didn't happen. Neither group were fanning any flames. 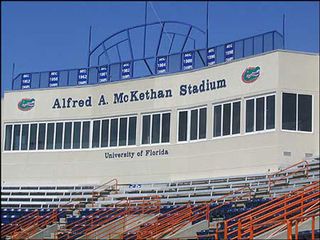 “We're very excited about being in the super regionals, but like everyone else, we'd rather be playing at home,'' Morris said.

“But Florida had an outstanding season and there's no doubt they deserve to host. I know they have an outstanding club. We're going to have to be at the top of our game to beat them, especially at this park. I've been here many, many times for many, many years at Miami and Georgia Tech. I'm expecting a great crowd and a great game.”

So, what about Miami losing to UF in the regionals last year?

“I don't think anything adds fuel to the fire. It's very competitive,'' he said. “The fact is, I don't know how many times in the past 17 years Miami and Florida have played for the right to go to the World Series or the super regional. But it seems like every other year since I've been here. This goes back a long ways. It's a great rivalry.''

“I don't think it's a fiery rivalry but a great rivalry. It's very competitive. I don't think there's bad blood between Miami and Florida, at least not from me. We've played them a lot of times and it's been a great atmosphere in both places.''

Is it more fun playing a rival in a super regional?

“I don't think you need anything more than Omaha on the line to be honest,'' Morris said. “We're playing 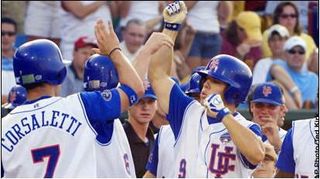 Texas A&M last weekend to have the chance to advance and it was hard played. When you get here, it doesn't matter who you are playing. Guys are going to come out and play. If they don't, something's wrong. This is for all the marbles, the chance to get to go to Omaha.

“I believe once you get to Omaha, any of the eight teams can win it. We've won it twice since I've been at Miami. Coach Fraser always told me that when he won it, it wasn't with the most talented teams. But they were the best teams. We've gone out there and lost with some of the most talented teams I've ever been around. But we've won it with a young team and with an old team. I know you can do it anyway.

“It's the right to go to Omaha is what it's all about. Every player in the United States who plays college baseball dreams of playing in Omaha and getting the chance to win a ring.''

“We came here to win a national championship. If we don't reach Omaha and win, it's a failure. We went there in 2008 and didn't win. We all felt [the season] was a failure. We all say Omaha after games and that starts in the fall. That's where it's at. That's where we want to be.'' 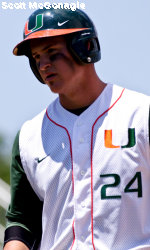 -- Will have more tomorrow, with Yasmani Grandal talking about Miami's bats waking up at the right time of the year as well as some stuff regarding the MLB Draft and how Morris says the timing of it may be disruptive, but it isn't the fault of the Major Leagues.

Also hope to have some pregame stuff from the radio guys who cover this team on a very regular basis (both from WVUM 90.5 The Voice as well as Joe Z. from WQAM) and maybe some stuff from the ESPN dudes.

-- Also, tomorrow, comes stats and stuff from inside the UF-UM series.

-- Don't forget for breaking news and such, you can subscribe to our social media sites. It's easy, it's free and sometimes it is fun.

-- For those Gator fans checking around today, sorry there wasn't news from the UF practice. I do apologize. They went early today -- before Miami's practice at 11:45 a.m. -- and I was driving up from South Florida and missed it.

With Joe Goodman and Gator Clause on vacation, I will try and fill the void with more Florida news tomorrow.