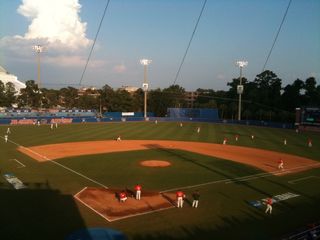 GAINESVILLE -- About ready to get going here at McKethan Stadium.

The host Florida Gators will be the home team tonight, Miami gets that honor tomorrow. If there is a Game 3 on Sunday, a coin flip will determine who gets last ups.

Little surprise on the mound.

Florida is throwing ace sophomore Alex Panteliodis (10-2), a lefty who beat up on Miami pretty good earlier this season.

Jim Morris is throwing senior righty David Gutierrez (5-2, 5.12) at the Gators. He is the only UM pitcher to beat the Gator this season.

Florida won two of three in the Gables earlier this season and have won four of the past five in the series. The Gators thumped Miami in last year's Gainesville Regional.

Here are the lineups, in case you are scoring at home. If that's the case, good for ya.

Back in a bit.

-- Canes are in Orange tops, white pants with green/orange caps with the M; Gators wearing all white with blue caps and The F.