Instead of being where he wanted to be, Chase Ford said he spent most of his time this spring and summer working as a maintenance man at his old high school in Corrigan, Texas, a small town with less than 2,000 people, located about a two-hour drive northeast of Houston. 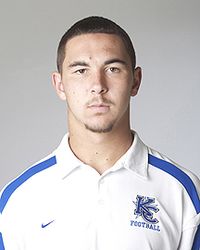 So what did Ford do to pass the time when he wasn't mowing the lawn or picking up after students?

"Daydream about catching touchdowns," the 6-7, 250-pound tight end said Monday as he shopped at WalMart with his family for the stuff he'll need when he moves into his new dorm on the University of Miami campus Tuesday.

"Miami coaches told me they want me to come in and produce. They're not expecting me to be a redshirt. So that's what I want to do -- make an impact."

Ford, one of 29 football players in UM's 2010 signing class, will be among a large group of players to begin taking classes in Coral Gables this week. Six arrived in January and participated in spring football. A few others are still waiting for academic issues to be cleared up (more on that later).

Ford was hoping to be among the early arrivals, but the NCAA denied him a waiver he needed to take off from Kilgore Community College and arrive at UM in January. At Kilgore, where former Hurricanes tight end Kevin Everett once starred, Ford caught 34 passes for 571 yards and three touchdowns during the 2009 season.

The Hurricanes, desperate for tight end help, didn't start recruiting Ford until last December. But once they did, it didn't take them long to convince him to pick them over Arizona and interest from North Carolina and become one of four new tight ends in the class.

Ford said he's been working hard during the offseason in the weight room to be physically ready to play every down if needed. The Hurricanes, who got a huge lift from former basketball star Jimmy Graham at tight end last season, had only two tight ends in the spring: senior Richard Gordon and redshirt freshman Billy Sanders. Ford, who will wear No. 9 at UM, said he thinks he can play right away for UM. Among the biggest areas where he says he needs to improve is blocking.

"I definitely feel like I've gotten stronger, faster," Ford said. "I know I ran a 4.68 as a freshman. I run a lot faster since then. When I visited Miami, saw the guys they had here before, I felt like I fit in with them [Dedrick Epps, Graham]. Both of those guys were good."

DL DELMAR TAYLOR HEADED TO JUCO: The Hurricanes may have signed 29 players in their last class, but not all of them are going to make it into school. Miami Beach defensive lineman Delmar Taylor is the first we know won't.

Taylor, who grew up in the Bahamas, was told by the NCAA he would not be cleared for admission because some of the classes he took when he lived there wouldn't transfer over. Taylor said he still plans to be a Hurricane. "I just have to do this before I can come back," Taylor said.

"It's going to be slow process for him because he may not be qualified," Raines coach Deran Wiley said of Glenn. "He went to an [Drop Back In Academy] his senior year, not here, and they're going through his stuff with a fine tooth comb. I think he's going to get in, but he'll be an August guy."

Cain, who graduated with a 2.5 GPA and scored a 17 on the ACT, is hoping to be an August guy too. "I'm just waiting on the SAT score," Cain said. "I took it a couple weeks ago and should hear back soon. I've just been training, getting ready, running hard. In my mind, I'm definitely leaving for UM August 4th."

Davis, the younger half brother of former Hurricane Phillip Buchanon, hasn't answered his cell phone of late. But both Canesport.com and InsideTheU.com reported this week he could be an academic casualty as well.