Nick Menocal got an offer in the mail from the University of Miami two weeks ago. It didn't take him long to cash in on it. 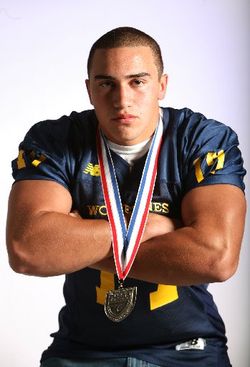 The 6-3, 232-pound Class of 2011 linebacker from Miami Belen Jesuit asked UM coach Randy Shannon Monday afternoon to save a scholarship for him in the school's next signing class, ending what had become a hot heavy recruiting process with a growing number of schools.

"A couple weeks ago I went to UM unofficially and just felt comfortable from the get go," said Menocal, whose mother went to UM. "Today I went back and I spoke to coach Shannon and told him this is where I want to commit. He said 'Welcome to the family.'"

Menocal, who had 17 offers including ones from Virgina, Iowa, and Florida State, recorded 61 tackles last season and helped lead Belen to the Class 3A state championship game. A baseball player most of his life, he didn't begin playing football until the spring of his freshman year at Belen.

His coach Rich Stuart said Menocal is very raw, but has plenty of upside. Menocal was one of the state's highest scorers at the Nike SPARQ camp, which measures overall athleticism. He ran a 4.59 in the 40-yard dash at the Miami Nike Camp earlier this spring and had a 35.5-inch vertical leap. This season, Menocal will play mostly defensive end for Belen, but said UM is recruiting him to play linebacker.

He will come in as one of UM's brightest recruits, boasting a 3.5 GPA. He already scored a 1510 on the SAT exam and is a full qualifier.

UM has six commitments in its 2011 class. Four are from South Florida.